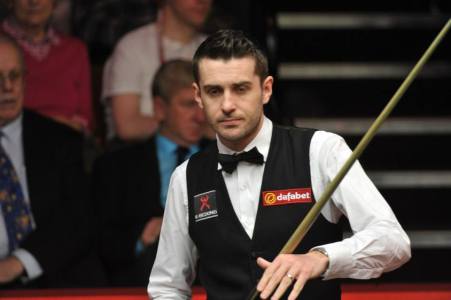 MARK Selby’s hopes of winning the World Championship for the first time are still very much intact after he moved into the quarter-finals with victory over Ali Carter.

The Jester from Leicester ensured a place in the last eight at the Crucible after beating Carter 13-9. Selby will next play either Alan McManus or Ken Doherty.

Despite not being at his most fluent best, Selby’s solid matchplay proved more than a match for Carter who failed to make the most of chances which came his way.

Leading 9-7 going into this evening’s final session, Selby extended his lead further by coming from 42-0 down to win the first frame on the colours. Carter again had chances in the next but couldn’t take them as a ruthless Selby moved three frames clear.

A frustrating night for Carter was made worse in the next frame when after making a break of 63, Selby replied brilliantly with a clinical 69 clearance to extend his lead to 12-7 and be on the brink of victory.

Carter pulled a frame back with a run of 57 to force an interval and managed to take another frame after Selby missed the last red to a top corner, allowing Carter to clear the table to close to 12-9.

But a miraculous fightback was not on the cards as Selby dominated the next frame to clinch victory.

Meanwhile, Ricky Walden will go into his final session against Barry Hawkins with a two frame advantage after having the better of this evening’s battle.

Breaks of 109 and 81 saw Walden go 6-5 up on Hawkins before a miss on the final black allowed the former Shanghai Masters and Wuxi Classic winner go 7-5 up at the mid-session interval.

Walden’s evening got better after the restart as a break of 112 put him three frames to the good and that lead stretched even further when he had the better of a scrappy 14th frame to lead 9-5.

Hawkins, who made the final last year, was in bad need of a frame or two before the close and managed to keep his chances of progressing alive as breaks of 87 and 53 helped reduce his deficit to 9-7. The pair resume to a finish on Saturday afternoon with all to play for.