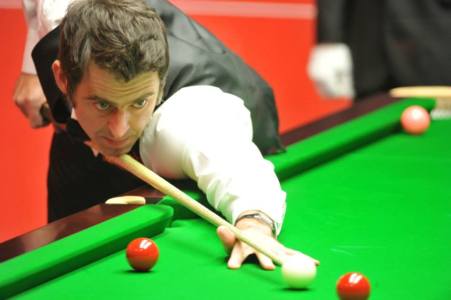 DEFENDING champion Ronnie O’Sullivan bought his A game to the table at the most crucial time as he came back from the verge of defeat to reach the World Championship quarter-finals.

O’Sullivan, who has won snooker’s biggest prize in the past two years, looked like he was heading for a shock exit to world number 15 Joe Perry when he trailed 11-9 midway through this morning’s (Saturday) final session.

But the five-times world champion produced his stunning best showing signs of recovery and brilliance on the baize and hit two majestic century breaks to pull a hard-fought win out of the bag. O’Sullivan will face either Shaun Murphy or Marco Fu in the quarter-finals.

The comeback, which saw O’Sullivan win four frames on the bounce, is a measure of how he has improved on the mental side of the game. In previous years he may have succumbed to the Crucible pressure when things were not going this way.

But there was none of that today as O’Sullivan showed plenty of mental toughness to come out the winner and keep his hopes of winning a third straight World Championship title alive.

Trailing 9-7 at the start of the session with his place in the tournament in jeopardy, O’Sullivan made breaks of 42 and 45 to close the gap to one frame at 9-8 behind.

But as the match had previously panned out, everytime O’Sullivan got close Perry then pulled clear again. And that happened once again when Perry cleared from green to pink to win a close 18th frame and go 10-8 in front.

O’Sullivan quickly responded with a break of 82 in the next before, to the surprise of the crowd, he missed a simple red to the corner pocket when it looked for all certainty he would level at 10-10. Perry took full advantage of O’Sullivan’s error as he went into the mid-session interval 11-9 ahead and just two frames away from a memorable win.

But after the restart O’Sullivan showed why he is the winner of five world titles. Breaks of 48 and 53 got O’Sullivan the start he badly needed reducing his deficit to 11-10.

A poor safety from O’Sullivan gave Perry the first real scoring opportunity of frame 22. But he failed to take advantage going in-off when potting the blue and cannoning into the reds. A later missed long red from Perry proved costly as O’Sullivan cleared to level at 11-11. It was the first time the scores were level since 1-1.

Then a brilliant long red from O’Sullivan set up a majestic break of 124 which led to the defending champion being ahead for the first time in the whole contest.

And with the winning line in sight O’Sullivan once again produced a faultless display of attacking snooker as a break of 113 proved the end for Perry who had earlier hit a delicate roll-up safety too hard.

The final stages saw O’Sullivan at his complete best for the first time in the tournament – in that form he will take some stopping in his bid for a sixth world crown.

Elsewhere, Alan McManus is in pole position to make his first quarter-final appearance at the Crucible in nine years as he took a commanding 10-5 lead against Ken Doherty.

McManus won six of the eight frames in the morning session and just needs three more this evening to seal his place in the last eight.