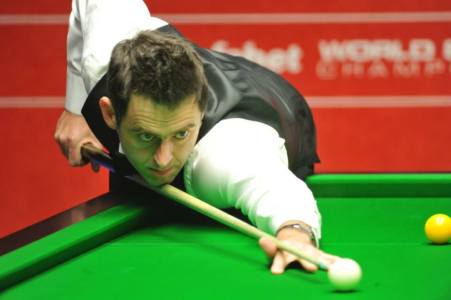 RONNIE O’Sullivan’s two-year defence of the World Championship title lies under threat after Joe Perry continued to defy the odds in their second round battle.

Arguably, for the first time in three years O’Sullivan’s place in the World Championship looks in a precarious state and will need to turn the match around late on if he is to reach the last eight.

After a slow start on Thursday, O’Sullivan was quick out of the blocks as a 93 break reduced his deficit to 5-4.

But Perry refused to let O’Sullivan’s quick-fire start get the better of him as a break of 68 helped him win the tenth frame. And Perry moved three frames in front when breaks of 46 and 48 helped him go clear at 7-4.

O’Sullivan ensured he went into the mid-session interval as he started at two frames behind with breaks of 31 and 66.

And the second part of the session went exactly like the first as O’Sullivan closed the match to 7-6 winning a black ball frame after Perry failed to build on a break of 63.

But Perry made no mistake in the next two frames as breaks of 88 and 73 put him in charge at 9-6 ahead.

Facing a possible overnight deficit of 10-6, O’Sullivan battled back from behind in the final frame to finish the session 9-7 behind. Only time will tell how important that final frame will prove to be.

Elsewhere, Mark Selby was once again pegged back by a determined Ali Carter as a 9-5 lead was cut to 9-7 at the close of the second session.

Like the opening session, the Jester of Leicester dominated proceedings but a late fightback from Carter means the final session remains beautifully poised. The pair resume to a finish at 7pm.

And Ricky Walden fought back from 3-0 down to level with Barry Hawkins at 4-4 as their second round tie got underway.

The match is a repeat of last year’s World Championship semi-final, which Hawkins won to get to the final.