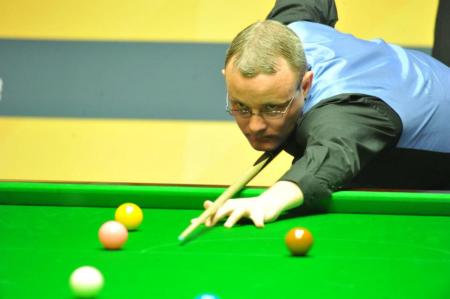 AS FAR as birthdays go, it could not have gone better this year for Martin Gould.

Londoner Gould marked his 34th birthday with an impressive 5-1 win over world number 8 Barry Hawkins on the opening day of the 2015 Shanghai Masters.

The annual ranking event is one of the most established events in the snooker calendar outside the UK, now in its ninth year.

A break of 109 gave Gould the perfect start prior to recording a 5-1 win against the former World Championship finalist.

Gould will next face John Higgins in the second round after the Scot beat China’s Liang Wenbo by the same score.

Four times world champion Higgins, who won the Australian Open earlier this season, eased to victory with breaks of 65 and 56.

Chinese wild card Fang Xiongman produced the shock of the day after he recorded an impressive 5-1 win over Jamie Jones.

Jones, who has been in decent form of late reaching the semi-finals of the Australian Open, lost four frames in a row as breaks of 115 and 70 earned Xiongman his biggest win to date. His reward is a showdown against world champion Stuart Bingham.

But Jones was the only professional to suffer defeat in the opening day’s wildcard games with Alan McManus, Mike Dunn, Peter Ebdon and Robert Milkins securing first round spots.