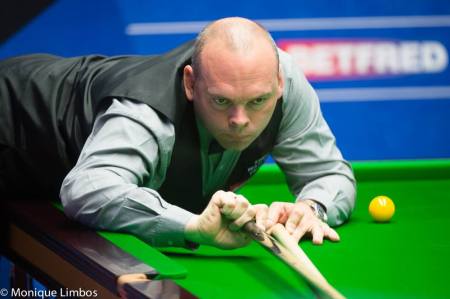 STUART Bingham began his defence of the Shanghai Masters title with a 5-2 victory over wildcard round winner Fang Xiongman.

The reigning world champion, who beat Mark Allen to lift his first Shanghai Masters crown twelve months ago, was dominant throughout against the man who 24 hours earlier recorded the win of his life after beating Jamie Jones 5-1.

Bingham won the first two frames without any major contribution before a break of 65 helped him take a commanding 3-0 lead.

Xiongman then showed some of the form which earned him a place in the first round as breaks of 41 and a brilliant 104 reduced his deficit to 4-2.

But the Crucible champion got over the winning line in frame seven with a run of 49.

The world champion will next face Mike Dunn who recorded one of the surprising victories of the second day’s play with a 5-3 win over Marco Fu.

The 43-year-old, who reached the semi-finals of the China Open last year, came back from 2-1 down and made four 50+ breaks to earn a showdown against Bingham.

Elsewhere, Judd Trump made the perfect start in his bid to win his first Shanghai Masters title after completing a comprehensive 5-0 win over Robert Milkins. The world number seven made breaks of 53, 74, 122 and 62.

Home favourite Ding Junhui, winner of this event two years ago, avoided an ealry exit after he beat Alan McManus 5-1. And Michael Holt knocked out world number 15 Stephen Maguire with an impressive 5-1 win.

And Kyren Wilson, Tom Ford and Jamie Cope ensured their place in the first round with comfortable wildcard round wins.

Meanwhile Ricky Walden has withdrawn from the competition due to the birth of his first child. His first round opponent Mattthew Selt receives a bye into the last 16.