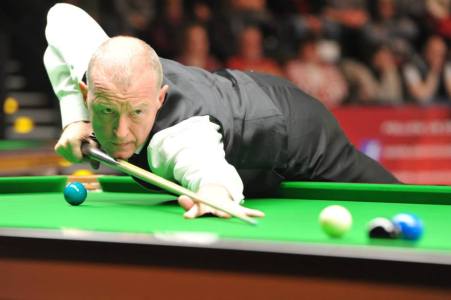 SIX-TIMES world champion Steve Davis faces a fight on his hands if he is to keep his tour place for next season after suffering an early exit in the Haikou World Open.

The Nugget will need to go on an impressive run in next month’s World Championship qualifiers if he is to remain on the tour after falling to a 5-3 defeat to Stuart Bingham during the ranking event’s opening day.

Davis’ cause was not helped as Thailand potter Thepchaiya Un-Nooh, also needing wins to secure his tour card, earned the most surprising win of the day after he beat Scotland’s Stephen Maguire 5-4.

To ensure a tour place for next season, players must finish in the top 64 of the provisional end-of-season Money List. Players below the top 64 face the grim prospect of being relegated from the main tour unless they qualify for an exception route.

Davis is currently 64th place but with no place in the PTC Grand Finals or the China Open, a solid run in the run up to the Crucible will be needed.

Meanwhile, defending champion Mark Allen safely secured his place in the last 32 with a 5-2 win over Mike Dunn which included the Ulsterman hitting the tournament’s highest break so far of 127.

Recent Welsh Open semi-finalist Barry Hawkins held off a comeback from Matthew Selt who came back from 4-0 down to force a final frame decider. Hawkins winning 5-4.

Welshman Ryan Day came back from 4-1 down to beat Michael Wasley 5-4 and Pankaj Advani beat Xiao Guodong by the same scoreline.

A break of 122 was the highlight for John Higgins who defeated Alex Davies 5-1 and Mark Selby beat Anthony Hamilton 5-3.

Other scores from today’s games: