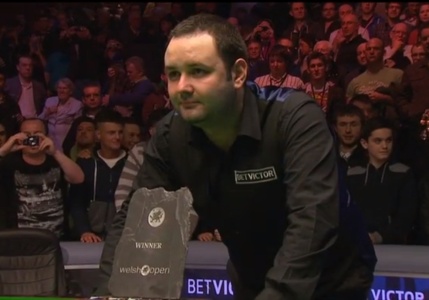 The Glaswegian battled his way to victory winning the deciding frame after looking down and out when trailing the match 7-5.

This title fills a huge gap for Maguire who last won a major title back in April 2008 when he was crowned China Open champion. Tonight’s victory also made amends for the Scot’s defeat on Welsh soil two years ago when he lost in the final of this competition to John Higgins.

This latest win for Maguire is deserved after knocking on the door for title glory in recent times. Last season he suffered heartbreak on two occasions – losing to Ronnie O’Sullivan and Peter Ebdon in the finals of the German Masters and China Open respectively. And to top that he missed out on appearing in his first World Championship final after losing to Ali Carter in the semi-finals at the Crucible Theatre.

The defeat will be a blow to Bingham who threw away some great chances to take the match out of Maguire’s hands. This is Bingham’s second loss in a final this season after losing to Ricky Walden in the Wuxi Classic competition back in July. But reaching the final in Newport continues a fine season for the Basildon star which has seen him be crowned Premier League champion and lift two Asian PTC titles.

Maguire started the final the better out of the two players as breaks of 114, 71 and 62 helped him win three of the first four frames.

But the second half of the afternoon session saw the reverse happen as Bingham levelled the match at 4-4 going into the evening session.

Bingham’s momentum carried on after the restart as he went ahead for the first time leading 5-4. Maguire responded well with a break of 71 to level the contest at 5-5 with the match beautifully poised.

Bingham restored his lead with a superb break of 118 and then appeared to have a hand on the trophy when he took a 7-5 lead after dominating frame 12. Maguire looked a frustrated figure as Bingham closed in on his second major ranking title.

A long and tense frame followed with both players realising the importance of it. The end of the frame saw the matches’ turning point unfold when a fluke on the final blue meant Bingham just needed a tricky and delicate pink to take an 8-5 lead. But with the cueball so close to the pink, Bingham missed it to the centre pocket – Maguire then potted the pink and black to reduce his deficit to 7-6 when it could have been all so different.

Maguire, with a new lease of life and bundle of energy, then levelled the match again before a break of 77 made for a stunning turnaround as he went back ahead at 8-7.

In a must win frame Bingham, just like he did in his semi-final win over Ding Junhui, dug deep from 59-6 behind and made a brilliant total clearance of 58 to force the final into a decider.

The final frame got off to an edgy start but it was to be Maguire’s night when Bingham misjudged a plant which resulted in the Scot making a title winning break of 82 and clinching Welsh Open glory.