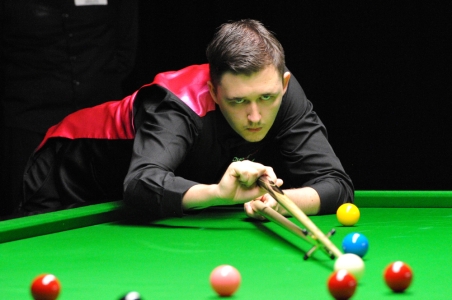 KYREN Wilson has said he cannot wait to take on a resurgent Judd Trump in the opening round of the Welsh Open.

The Kettering based potter, who made the quarter-finals in this season’s Shanghai Masters, faces possibly his toughest challenge of his snooker career when he faces the talented world number four on Saturday night (February 22) in front of a big crowd at Newport.

Now in its 23rd year the Welsh Open, which is one of the most established ranking events in the snooker calendar, begins tomorrow (Wednesday) with this year’s winner netting a top prize of £60,000.

Stephen Maguire is the defending champion following his win over Stuart Bingham in last year’s final.

Trump, winner of the UK Championship, China Open and International Championship, goes into the Welsh Open after showing signs of returning to his best form following an impressive run to the final in the German Masters followed up by a run to the quarter-finals in the Gdynia Open PTC event.

Wilson, who is on the first year of a two-year tour card and ranked 90 in the world, booked his place in Beijing to play in the China Open earlier today (Tuesday) with a 5-4 win over Marcus Campbell.

And speaking to The Old Green Baize, Wilson said he is relishing the prospect of playing an in-form Trump but knows he is in for a tough test.

“It’s obviously not the easiest of games but I like the way Judd plays and it is nice to play someone who plays an open, attacking game,” he said.

“I’m looking forward to playing him. It will be exciting because Judd brings in good crowds and it will be a good atmosphere. Hopefully we can put on a good game for them.

“I wasn’t disappointed by the draw because you have to play the top players at some point if you want to do well.

“The Gdynia Open was my first tournament in two months and I was very rusty but now that is out of the way I feel I am ready to kick-start my tournament play again and my form is getting back to its best.

“I’ve had a maximum break in practice so that’s always a good sign when you go into a big tournament. I know Judd is playing well so its important to bring my form into the match table to have any chance of beating him.”

The match will be Wilson’s first at the venue stages of the Welsh Open and he added the introduction of the new flat draw system has done him the world of good – but would like to see a change.

“I’ve never been to Newport before and I’ve heard it’s always a very good tournament so I’m really looking forward to going there,” he added.

“The flat draw can still be tough because you can come up against top stars such as Ding Junhui like I did for the German Masters, but saying that, it is easier to win one match than four or five which was the case previously.

“I prefer the flat draw but I think maybe we should play two qualifiers rather than just the one because then you are on a bit more prize money when you qualify.

“And you also feel you’ve earned it more when you win two games. I don’t know what other players think but I just feel I’m not properly in the tournament after winning just one match.

“But I can’t complain too much because I’ve really enjoyed this season and experiencing new places.

“This time last year I was thinking of giving snooker up. What Barry (Hearn) has done for the game has been brilliant.”

Visit www.worldsnooker.com for the full list of Welsh Open fixtures.