Stuart Bingham has revealed having no crowd at the Crucible made it feel like his first round World Championship match was a “practice session”.

The 2015 world champion made it through to the last 16 stage by beating Ashley Carty 10-7.

Leading 5-4 overnight, Bingham appeared to be in fine form in the opening part of the second session taking the first four frames with breaks of 109, 96, 57 and 58 to lead 9-4.

But the world number 14 had to battle his way over the winning line after Carty, making his Crucible debut, battled his way back into the match winning three frames on the bounce after the mid-session interval.

But Bingham managed to get the job done in frame 17 by knocking in a much-needed break of 82 at a time when Carty was putting him under the sword.

Bingham now awaits the winner of the first round tie between Mark Williams and Alan McManus. 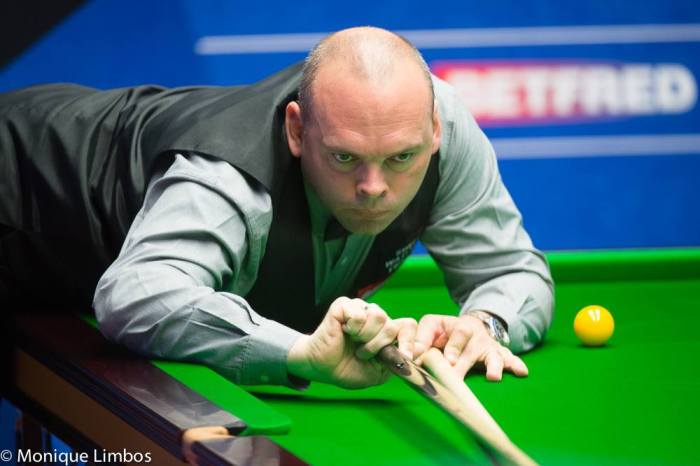 After the match Bingham felt it was weird stepping into the Crucible arena with no fans following yesterday’s announcement from the Government it was to stop a pilot scheme allowing spectators to attend sporting events due to a rise in coronavirus cases.

He told Eurosport: “It was a bit weird (seeing no fans). Coming back from the interval you would normally get a round of applause and there was nothing. It felt really weird.

“I’m happy to be through. Yesterday the table and the match felt a bit alien. To get out of that 5-4 ahead not playing my best gave me a bit of a sleepless night but I came out today and showed my potential.”