World Snooker chairman Barry Hearn says Ronnie O’Sullivan’s claims of him being “bullied” by snooker’s governing body are unfounded and damaging to the sport’s reputation.

A statement has been released on World Snooker’s official website, written by Barry Hearn, following O’Sullivan’s post match comments after beating Gary Wilson in the opening round.

O’Sullivan said in a press conference he will no longer be bullied by the snooker governing body World Professional Billiards and Snooker Association (WPBSA).

His claims stem from receiving a disciplinary warning from the body earlier this year which stated he could face future fines if he continued to misbehave during tournaments.

The letter came after O’Sullivan publicly criticised a referee and allegedly swore at a photographer – though he was not punished by the governing body for his actions.

In a statement released today (Monday), Hearn said O’Sullivan had signed a players contract, like all other tour players, stating of their commitments and responsibilities while playing in World Snooker tournaments.

It adds neither World Snooker or Hearn has any involvement in the disciplinary process of snooker or have they received communications from O’Sullivan’s lawyers as to his treatment concerns. 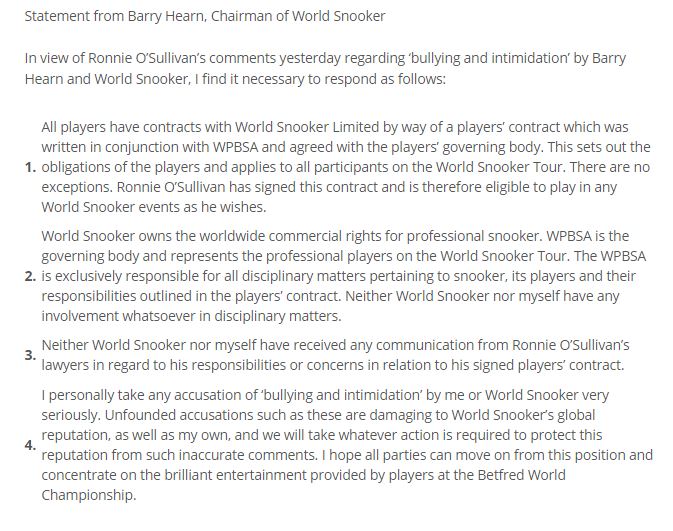 And Hearn stressed the importance of how O’Sullivan’s comments are damaging to the sport.

The statement reads: “I personally take any accusation of ‘bullying and intimidation’ by me or World Snooker very seriously.

“Unfounded accusations such as these are damaging to World Snooker’s global reputation, as well as my own, and we will take whatever action is required to protect this reputation from such inaccurate comments.

“I hope all parties can move on from this position and concentrate on the brilliant entertainment provided by players at the Betfred World Championship.”