STUART Bingham will be somewhat of a relieved man after he managed to trail Ali Carter by just a single frame in one of the opening matches of the 2016 World Championship – but it could have been much worse for him.

Beginning the defence of snooker’s biggest title, Bingham appeared out of sorts for most parts of the morning session missing frequent long pots and straight-forward shots as Carter won five frames in a row to take a 5-1 lead.

This was stark contrast to when he last played at the famous Crucible Theatre when Bingham’s fine form helped him to a memorable World Championship final victory against Shaun Murphy.

Trailing 5-1, Bingham looked to be in further trouble when a safety error gifted Carter a golden chance to go 6-1 to the good. However the Essex man failed to take advantage before the defending champion reduced his deficit to 5-2.

And that miss from Carter appeared to be a match-turner  as Bingham made breaks of 96 and 90 to finish the session just 5-4 behind – a great result for Bingham who could have been out of sight.

The match resumes to a finish later tonight (Saturday) from 7pm.

Meanwhile Hong Kong’s Marco Fu stands in pole position to reach the second round after winning six of the opening eight frames in his first round tie against Peter Ebdon. 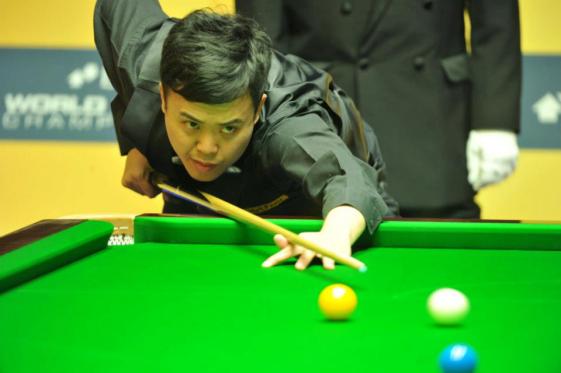 And Fu deserved his four-frame advantage at the half-time stage after making back-to-back centuries of 111 and 138 as well as three other runs of 50 or more.

The match resumes to a conclusion from 7pm.