THE 2016 Masters final will be a repeat of the World Championship finale three years ago as Barry Hawkins takes on Ronnie O’Sullivan.

O’Sullivan could not have asked for a better start to his return to major event snooker after wins against Mark Williams, Mark Selby and Stuart Bingham secured him a place in Sunday’s final – his eleventh in the Masters.

The five-times world champion, who has only just returned to action following a eight-month break from the game, has looked stronger as the week has gone on and will be the bookies favourite to clinch a record-equalling sixth Masters title and level with Stephen Hendry. 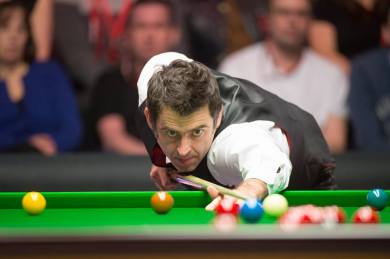 However despite an entertaining 6-3 win over reigning world champion Bingham in front of a packed Alexandra Palace crowd on Saturday night, O’Sullivan was far from happy with his game.

“It’s difficult at times because my touch and feel is so bad – I am butchering everything and I feel embarrassed,” he said.

“I’m not sure if it’s my back problem but my body and cue feel disconnected.

“I’m scared of going out there because I’m struggling with my game. I’m petrified, but I’ve got to go and do it. I’m like a golfer who faces a seven foot putt and hits it eight feet past the hole.

“Stephen Hendry should be the man to keep the records. I don’t deserve to be breaking the records that he and Steve Davis set because they were masters of the game. I believe in karma and my back going could be punishment for not focussing on snooker enough over the past two or three years. I’m not the same player I was three years ago.”

However, Hawkins, one of snooker’s most consistent stars over the last few years, will fancy his chances to upset the odds after an impressive 6-4 win against the much-fancied Judd Trump on Saturday booked him a place in his first Masters final.

The world number eight said after his semi-final victory: “It means everything to me to get through to another big final. I was just happy to win one match this week, so to get through to the final is a great achievement.

“I don’t care who I play tomorrow, I’ll just enjoy every moment because these things don’t come about that often. A while ago I got fed up and the travelling was getting me down, but in the end that spurred me on to practise harder. The hunger is back now.”

Ronnie O’Sullivan has won nine out of the ten matches he has played against Barry Hawkins.