World champion Stuart Bingham suffered an early exit in the International Championship after crashing out to China’s Yu Delu. 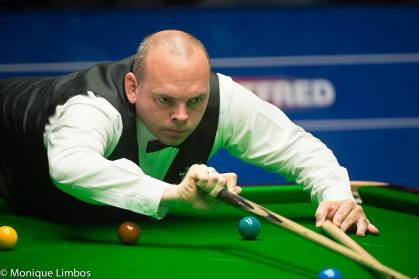 Delu, who last year recorded a famous win against Ronnie O’Sullivan in the PTC Grand Finals, raced to a 3-0 lead with top breaks of 72 and 48 before Bingham hit back by reducing his arrears to 3-2.

But the Basildon man could not stop the 28-year-old from recording one of his most impressive victories of his career as he took the next three frames to earn a place in the Last 32.

Except for a run to the semi-finals in the Shanghai Masters last month, Bingham has failed to reproduce the form which saw him win the World Championship for the first time in May.

After the match Bingham told World Snooker: “I missed easy balls in the first few frames, I was gifting him chances. I should have wrapped the last two frames up earlier. Yu practises near me in Essex so I know how good he is, but I played badly.”

Elsewhere, world number four Neil Robertson had no such problem as he cruised into the third round with a 6-2 win over Martin O’Donnell. The Australian compiled breaks of 90, 86, 58, 127 and 104 to set up a third round tie against Fergal O’Brien.

China’s number one star Ding Junhui followed up his first round win on Sunday with a comfortable 6-2 victory over Craig Steadman to reach the third round.

A superb comeback from Jack Lisowski saw him progress to the third round.Breaks of 100 and 62 from 5-4 down helped Lisowski beat Ali Carter in an epic encounter.

There were also final frame decider wins for Ben Woollaston and David Gilbert against Robbie Williams and Xiao Guodong respectively.

Tuesday will see all third round matches played to a conclusion.