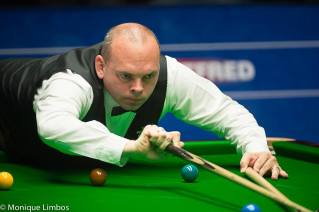 STUART BINGHAM is just four frames away from winning the World Championship title for the first time after he dominated the final’s penultimate session.

On the biggest day of his career so far, the 38-year-old continued where he left off on Sunday and won six of the eight frames played so far today earning him a 14-11 lead over Shaun Murphy going into tonight’s final session.

Bingham, who trailed at 8-4 at one stage last night, was in great form and deservedly took a three-frame lead at the close of the session. As well as having a firm grip on the title he could have also landed a 147 maximum break but unluckily ran out of position on the final red.

Murphy, the bookies favourite for the title, before a cueball was struck in this match will need a good start to the evening session if he is to produce a comeback victory

Trailing 9-8, Bingham made the perfect start to the session as a break of 87 got him on level terms.

Bingham, playing in his first World Championship final, then took the lead for the first time after a missed final red from Murphy proved costly allowed him to go into a 10-9 lead.

Then the Basildon potter had the crowd and television audiences on the edge of their seat after he potted 14 reds and 14 blacks to be in with a chance of a £30,000 147 making prize. But Bingham had to settle for a break of 112 after a difficult cut on the red missed the centre pocket.

But Bingham managed to put the 147 disappointment behind him  by winning the next frame to 12-9 in front at the mid-session interval.

After the restart Murphy, looking to win his second world title, stopped the rot  reducing his arrears to 12-10 before the next two frames were shared.

But Bingham ensured he had a three frame lead ahead of tonight’s finale taking the next frame to go 14-11 in front.