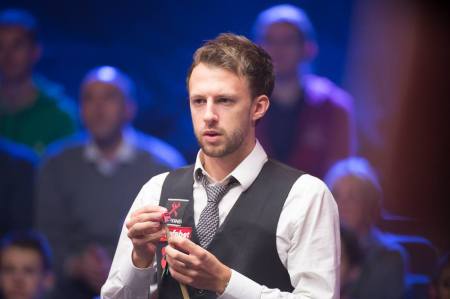 ACE OF the pack Judd Trump has said winning his first World Championship title will be on the cards if he continues to play the way he is doing.

The Bristol star, who reached the final of the World Championship four years ago, took just over ten minutes to seal his place in the semi-finals of the tournament after winning the one frame he needed to beat Ding Junhui.

The commanding 13-4 victory saw Trump at his complete best which will give him the confidence he needs ahead of a semi-final meeting with either Stuart Bingham or his one-time idol Ronnie O’Sullivan.

Trump has enjoyed one of his best seasons in recent years after winning the Australian Goldfields Open and the World Grand Prix as well as making the final of the Champion of Champions and the UK Championship. And now he stands just two wins away from ending the season in style by becoming world champion for the first time.

And if the five-times world champion beats Bingham later today, the pair will clash again for a place in the final of the World Championship – just like they did two years ago when O’Sullivan comfortably beat him 17-11.

“If I continue to play like this I won’t get beaten, but to keep up the same level for another five days would be extremely hard,” Trump said after his quarter-final win.

“I felt ill before the game so I wasn’t sure what my concentration would be like. I’ve had a cold so I need to rest up now and I should be fine for tomorrow.

“I shut him (Ding) out and put a lot of pressure on him from the start. This tournament is all about consistency – you can play well in your first three matches but then lose in the semis. I’ve got to keep doing it, and if I can do that for the whole tournament I’ll take a lot of pride from it.

“It will be a different atmosphere once it’s down to one table and everyone will raise their game. The crowd will be immense and that will pick me up.”