TEN DAYS ago 32 players stood tall gunning for World Championship glory – but now only eight remain in contention for their moment of destiny.

If it wasn’t serious before, it certainly it is now with the World Championship quarter-finals set to get underway.

The Old Green Baize looks closely at the eight men still standing at the Crucible, looking at how they’ve done so far and how they could go in the days to come.

Well what a week or so it has been for Scotland’s Anthony McGill!

The 24-year-old is enjoying his best days of his career having knocked out Stephen Maguire and reigning champion Mark Selby to reach the quarter-finals – not bad for your maiden appearance at the Crucible.

No matter what happen from here, McGill has nothing to lose. The promising star is the talk of the snooker world but how much longer can he keep it going?

Another tough challenge awaits as he takes on Shaun Murphy who is in fine form after brushing aside Robin Hull and Joe Perry. Its another test for the Scot but as he has shown already, on his day he is match for anyone.

It will be fascinating to see how McGill copes in his biggest match yet. 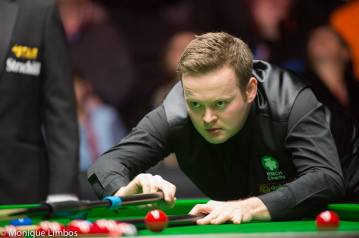 Make no mistake about it, Shaun Murphy is in the form of his life – and isn’t he showing it!

This year’s Masters winner is continuing a wonderful 12 months of fine form into snooker’s biggest event after cruising through the first two rounds thrashing both Robin Hull and Joe Perry.

Excellent break building, tremendous long potting and cue power – Murphy has all the tools equipped to win the World Championship once again.

Facing McGill will be a tough task given the Scot’s wonder achievements and game play so far but this is a match Murphy will be expected to win.

It was ten years ago since Murphy stunned the snooker world winning the world title as a qualifier. After years of frustration, there is no doubt Murphy is ready to be a world champion again.

Momentum and form are on his side but can he answer the critics and deliver when it really matters?

If you asked Barry Hawkins five years ago he would have gone on to reach back to back World Championships semi-finals he would have bitten your hand off.

Hawkins’ improvement in recent years has been a delight to see and he’s had to be at his battling best to remain in the tournament this year.

The world number five was forced to dig deep when Matthew Selt went on a great comeback in his first round match before winning a final frame decider. And in the second round he fought back from behind to knock Mark Allen out of the competition.

It’s these battling qualities to his game which is why he is so popular to fans of the game and why he has been successful at the Crucible – making the final of course in 2013. You can never write him off.

Those battling qualities will be tested to the fore in his next match when he takes on Neil Robertson.

But one thing is for certain he will keep going right to the end and that makes playing him very difficult.

The Thunder from Down Under is on a mission this year and he certainly looks hungry for it.

Neil Robertson was pipped to the post by Mark Selby in the semi-finals last year, now he wants to make amends and go the distance.

Landslide victories over Jamie Jones and Ali Carter stand him good stead ahead of the quarter-finals. His last visit to the table was a break of 145 – the highest break of the tournament so far.

Against Hawkins Robertson will back his natural ability to come through the match. What snooker fans and insiders want to see is how Robertson reacts to being tested which he has not been so far.

Robertson won the World Championship five years ago, he’ll be hoping its time for another one.

Before a ball was hit at the Crucible this year, not many had Ding Junhui down for the title – surprising given his achievements in the sport winning more than ten ranking titles.

But this season has been one of Ding’s worst for many years with only a PTC title to his name.

And that dip in form has clearly been evident going 4-0 down against Mark Davis and 5-1 behind against John Higgins. However on both occassions Ding has battled his way to win – making 18 breaks of 50 or more in the process.

So is he finding the gears again just at the right time?

Higgins said Ding looked to have grown up following his defeat. “He has grown-up, he’s smiling more, he’s more at ease within himself, he’s a big, big danger to win this tournament.”

Winning the World Championship will make history as he would become the first Asian player to lift snooker’s greatest prize. For years insiders of the game have said Ding will one day be world champion. Is 2015 the year, Ding grows up to be champion of the world?

Since his stunning breakthrough in 2011 when victory at the China Open led to a run all the way to the World Championship final, Judd Trump has been snooker’s younger Ronnie O’Sullivan so to speak.

The flair, speed and talent around the table are all traits which have made him in the eyes of many a future world champion.

Four years ago a young Judd lost to a wise John Higgins in the final – sadly for him he has not reached the world final since.

But now we see a much more mature and focused Trump at the baize. Winner of two major titles this season including a World Grand Prix final win over his hero Ronnie O’Sullivan shows he is now turning into a real winner.

Wins against Stuart Carrington and Marco Fu were expected but now he is set for his first major test in a resurgent Ding Junhui – a match which will make for fascinating viewing.

Like the other players at the top he is blessed with all the tools needed to win the sports toughest event. Can he finally deliver the prize his natural talent deserves? 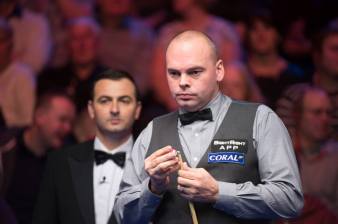 One of snookers most consistent stars over the last couple of years – Stuart Bingham is now just three wins away from the world title.

Bingham’s rise to the elite has been a joy to see and now he has the chance to show what he can do on snooker’s biggest stage yet.

This season’s Shanghai Masters winner will once again lock horns with Ronnie O’Sullivan after wins against Robbie Williams and Graeme Dott.

Bingham’s record against the five-times world champion is not the greatest. In the UK Championship semi-finals Bingham let a good lead slip as O’Sullivan fought back to win.

To face arguably snooker’s most talented player will be hard for Bingham but if you going to the best you have to beat the best.

And at the Crucible there is no better place for Bingham to do it.

It wouldnt be a normal World Championship without fun and mind games from Rocket Ronnie would it?

After victory over Matthew Stevens today, O’Sullivan said he wasn’t as motivated to win the World Championship than he has been in previous times.

Whether you believe him or not is another question but lets deal with the facts. O’Sullivan is chasing his sixth world title and if he does so will join a small list of players to have achieved the feat.

There were signs against Stevens that O’Sullivan was back to his majestic best – if he can maintain that level of performance then that spells danger signs for the rest of the pack.

O’Sullivan has appeared in three World Championship finals in a row and on his day he has proved he is the best of them all. Last year Mark Selby proved he could be beaten but with him out – is there anyone who can else beat him?

Trump beat him in the World Grand Prix several weeks back but would he be able to do so in a longer match competing for the snooker’s biggest title? Only time will tell.

If O’Sullian is switched on and motivated enough then watch out because he could take some stopping.