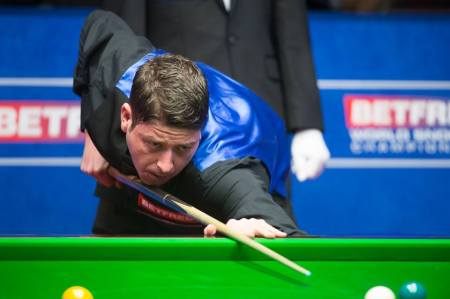 MATTHEW STEVENS produced one of his best displays at the Crucible in recent years as he thrashed Mark Williams to reach the second round of the World Championship.

The Welshman just needed three frames to secure a place in the last 16 after completing a 10-2 win. He’ll next face Ronnie O’Sullivan who also needed little time to seal a first round win over Craig Steadman.

It was ten years ago when Stevens reached the final of the World Championship and he rolled back the years with this sublime performance against the two-times world champion.

Stevens last made the semi-finals of the World Championship three years ago and more break building like this could see him go on another similar run. But next up will be another tough test for the Welshman as he faces O’Sullivan – who has reached the last three World Championship finals.

Stevens said: “It’s never nice playing Mark, we’ve known each other for 28 years, but you’ve got to go out there and do a job

“I’m just going to enjoy the game, if I lose I lose but I will give it my best shot. I’m not afraid of Ronnie, I will just go out there and play my own game.”

O’Sullivan was also quick in getting the result he wanted this morning after he defeated Craig Steadman 10-3 following his commanding overnight lead from Tuesday.

“I got off to a good start and apart from a few misses I’m pleased, you can’t pot everything so I was more pleased with how I just regrouped and got going again,” O’Sullivan said.

Elsewhere, this season’s Masters winner Shaun Murphy took full control of his first round tie against Robin Hull as he took a 7-2 lead overnight.

And Players Championship winner Joe Perry just needs two more frames tonight to seal his place in the second round after going 8-1 in front against China’s Zhang Anda.

Judd Trump, one of the favourites to win the World Championship, kicks off his Crucible campaign tonight taking on debutant Stuart Carrington.