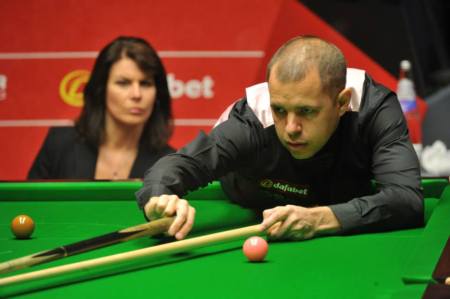 BARRY Hawkins is through to the second round of the World Championship but was made to do it the hard way after a brilliant fightback from Matthew Selt.

Hawkins’ pathway to the last 16 stage of snooker’s biggest event looked comfortable when he led 9-4 at the mid-session interval following his demanding overnight lead of 7-2.

But after the restart Selt produced a glorious comeback as he won the next five frames with stunning breaks along the way including a 102, 109 and 94 which turned 9-6 into 9-9.

But Hawkins refused to let the events of the five previous frames stand in his way as he battled his way to a 10-9 win – meaning all Selt’s efforts were to no avail.

It was a case of deja-vu for Hawkins who last year let a significant lead slip through his grasp in the World Championship quarter-final against Dominic Dale before winning the final frame to advance through.

“It’s a terrible feeling when someone is coming back at you, there’s nothing worse,” Hawkins said. “You see your lead disappearing and your opponent growing in confidence, and bouncing around the table. It’s a horrible place to be

“I had to keep telling myself that I’m one of the top players, and to keep believing. I tried to stay as calm as I could.”

Hawkins, who reached the final of the World Championship in 2013, will face either Mark Allen or Ryan Day in the next round.

Neil Robertson continued where he left off yesterday as he just needed three frames to a complete a 10-2 win over Welshman Jamie Jones.

The Australian, who won the World Championship five years ago, was once again in fine form as he hit a break of 133 to open the proceedings which followed his two century breaks of 143 and 109 earlier in the match.

Elsewhere, Stuart Bingham shook off illness to beat Robbie Williams 9-7 in their first round encounter.

Bingham, looking to make amends after a surprising first round exit last year, was suffering a heavy cold throughout the match but managed to overturn a slender half-time deficit before crossing over the winning line.

China’s number one star Ding Junhui will have to come back from behind after a struggling start in his bid to win the World Championship for the first time.

Ding, who suffered a shock first round exit last year to Michael Wasley, was 4-0 down against Mark Davis as his poor season continued into the Crucible Theatre.

But he battled back after the break to win the next three frames meaning he trails by just a single frame when the pair resume to a finish on Tuesday morning.

And Ali Carter, playing at the Crucible for the first time since his lung cancer ordeal last year, showed signs he was back to his best form as he took an overnight 6-3 lead against Alan McManus.