CRUCIBLE debutant Anthony McGill hit a century break under the most pressurising moment of his career to complete a memorable 10-9 win over Stephen Maguire.

McGill, who won a final frame decider to qualify for the World Championship just several days ago, hit a brilliant break of 122 to clinch a place in the last 16 on snooker’s biggest stage and set up a meeting with defending world champion Mark Selby.

However the world number 32, considered to be one of the sport’s most promising stars in the making, was made to win the hard way after Maguire produced a brilliant comeback from 9-5 down to take the match to a deciding frame shoot-out.

Remarkably, it is the third consecutive year Maguire has lost a final frame decider in the first round of the World Championship after previously losing 10-9 to Dechawat Poomjaeng in 2013 and Ryan Day in 2014.

And Maguire will have to reflect on another first round exit after McGill produced a stunning display of temperament to erase the previous four frames and get over the wining line with a break which oozed class.

Also through to the next round is four-times world champion John Higgins who beat Robert Milkins 10-5.

Leading 6-3 overnight, Higgins – who last won the World Championship four years ago – won the opening two frames with breaks of 77 and 75 before Milkins reduced his arrears back to three frames at the mid-session interval. 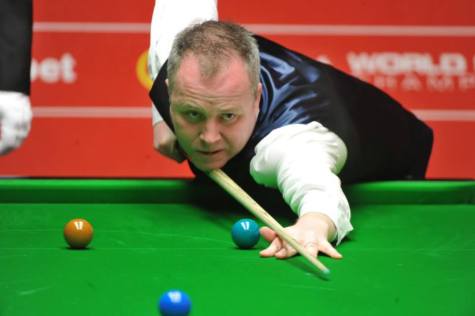 But breaks of 69 and 113 after the restart clinched the match for Higgins who in recent months has looked back to his best form after winning the Welsh Open earlier in the year.

And the Scot said this was his best performance here since beating Judd Trump to win the world title back in 2011.

“I’m happy to beat Rob because he’s a dangerous opponent,” he said. “I was pleased when the draw came out because I’d rather know I was going to be in for a tough game, rather than face a debutant who everyone expected me to beat easily.

“I hit the ball well and felt good among the balls. That was the best I have felt here since 2011.

“I have doubted myself in recent years but the Welsh Open gave me a boost. Before the Masters I cut my cue down to the shortest length it has ever been and since then I have felt more in control of my technique.”

Another Scot who had plenty of reasons to smile was former world champion Graeme Dott who showed his usual determination and grit on the baize to beat Ricky Walden 10-8.

In a tight contest throughout Dott, who won the sport’s biggest title back in 2006, fought his way over the winning line preventing Walden to force a final frame decider from 9-7 behind.

Dott, who did not even qualify for the tournament last year, said: “I wasn’t here last year which was a horrible feeling – I couldn’t even watch the first week, I tried to avoid it. So it’s nice to know that I can actually still do it at the Crucible.”

This morning saw Hong Kong’s Marco Fu complete a 10-6 win over Jimmy Robertson after making breaks of 88, 63 and 73.

Elsewhere on the tournament’s second day, Australian Neil Robertson showed why he is such a big contender for the title producing a red hot display against Jamie Jones.

Robertson, who won the World Championship five years ago, blitzed into a 6-0 lead against the Welshman knocking in the tournament’s highest break so far of 143 as well as 109 and 94.

Jones hit back to reduce his deficit to 6-2 before a break of 56 helped Robertson to a 7-2 overnight lead.

Meanwhile 2013 World Championship finalist Barry Hawkins enjoyed a 7-2 overnight lead after dominating the opening session of his first round match against Matthew Selt.