DUNN RECALLS THE WEEK HE STUNNED THE SNOOKER WORLD IN BEIJING

IT WAS the week which Mike Dunn has called his most satisfying in his entire playing career.

Lets wind the clock back a year ago, just prior to the China Open of 2014 when Mike Dunn’s status as a professional snooker player was hanging by a thread.

Dunn was a man badly in need of a good run and change of fortune if he was to remain on the main tour for what would have been a 24th consecutive year.

The Redcar potter was starring down the barrel as the End of Season Provisional standings saw him way behind the required top 64 benchmark with time and events running out.

Dunn was way behind the pack and needed solid runs in the final two events of the campaign – the China Open and the World Championship – to have any chance of remaining on the circuit.

And when trailing 4-1 to Peter Lines in the first round of the China Open, it seemed he would then have to rely on all of his fading hopes with a last chance run at the World Championship.

But the events from there led to a wonderful story which stunned the snooker world.

From the brink of defeat, Dunn came back to beat close friend Lines 5-4 which remarkably kick-started an incredible run which even surprised himself.

The turn-around led to wins against Tian Pengfei and Craig Steadman before he then caused the tournament’s biggest shock after beating Mark Selby to reach the semi-finals of a major ranking event – something he had never done before.

Beating Selby, who was to become world champion just weeks later, had meant from out of nowhere Dunn looked to had done enough to keep his place on the tour – rocketing up the provisional seedings, comfortably into the top 64 – completing a remarkable turnaround. 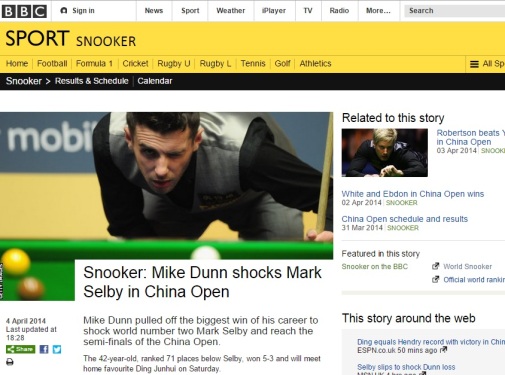 Knowing he had done enough to remain on the tour, the emotion of what he achieved got the better of Dunn in the semi-final as he crashed to a 6-0 loss to eventual winner Ding Junhui.

Speaking to The Old Green Baize, Dunn said his success came after deciding to stay in China following his exit at the World Open three weeks before the start of the China Open.

“The season before last I was very ill so it put me in a horrible position where I had to perform very well to stay on the tour,” he said.

“I spoke to Matt from Pro Snooker Blog at the start of last season and he told me I had to make up £40,000 grand in one year.

“As far as I’m concerned I’m a player who should be ranked 30/40 in the world but due to illness I dropped back because of it.

“I made my mind up before I went to Haikou last year for the World Open I was just going to go straight up to Beijing and not go home and just give it everything I could leading up to the tournament in the hope I could stay on the tour.

“I thought if I gave it everything I’ve got then I can’t do it anymore.

“I remember playing Peter Lines, who is like my brother to me, and I was 4-1 down. Thinking I’d lost I played well because the pressure had gone but my game and practice then all came together and I somehow managed to win.

“Then when I beat Selby in the quarter-finals I felt I had done enough to stay on the tour which was my main objective.

“It was sheer effort and sheer determination that got me there, it was my most satisfying week in snooker. But it was also tough emotionally as the achievement just got the better of me towards the end.

“I felt I deserved to be in the semi-final because everybody who left Haikou were joking with me saying ‘you’re an idiot for staying’ and ‘I cant wait to get home’. But I knew I had to give it everything and thankfully it paid off.

“Snooker has been my life and I don’t have a clue what I would have done if I dropped off the tour.”

The 43-year-old said a repeat performance in 2015 could prove difficult after suffering more health problems during the season.

“I’ve had a few problems prior to Christmas and had a hernia and glandular fever which meant I had to pull out of the German Masters and the World Senior Championship,” he added.

“I’m not in full fitness but trying my to scrape through it and winning matches the best way I can. My muscles are trembling all over but it would be great to go on another run.

“The China Open is a fantastic event which all the players love.”

Dunn takes on Fergal O’Brien in the last 64 stage of the China Open on Monday.