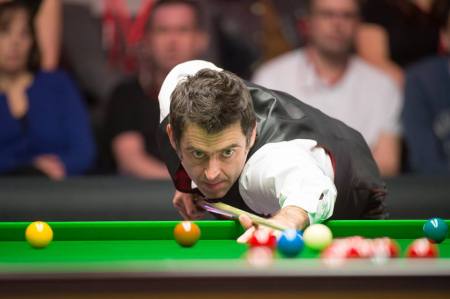 RONNIE O’SULLIVAN says he could struggle to achieve success in the new World Grand Prix because of rustiness.

The five-times world champion did enough to progress into the last 16 of snooker’s newest competition, which began on Monday, after beating Rod Lawler 4-2.

The new non-ranking event, being held in Llandudno in Wales, stars the best top 32 performing players from ranking events since the start of last season’s World Championship

O’Sullivan, who has not played since competing in last month’s Welsh Open, will play the winner of today’s (Tuesday) first round match between Robert Milkins and recent Indian Open winner Michael White.

And the 39-year-old said he could struggle if White was to win his first round match.

“I was very rusty and didn’t expect to win tonight,” he said.

“I’ve been enjoying life so I didn’t want to force myself to the practice table. If I can get through to Friday I might have half a chance, but you can’t expect to take a month off and then come and compete with these guys. If I practised for four hours a day, I’d be favourite to win most tournaments. But I’d rather do stuff that floats my boat.

“If I play Michael White next I’ll be going home because he’s playing well. He has won the last two tournaments, he’s full of confidence and he would be more than favourite to beat me.”

Elsewhere, reigning world champion Mark Selby kicked off the new event with a 4-1 win over Michael Holt. The Jester from Leicester will face Martin Gould in the second round after he defeated Scotland’s Alan McManus by the same scoreline.

And Stuart Bingham and Liang Wenbo came through final frame deciders to progress into the last 16. Bingham edged Anthony McGill winning the final frame and China’s Wenbo trailed Mark Allen three times but hit back to win 4-3, making a 51 in the decider.