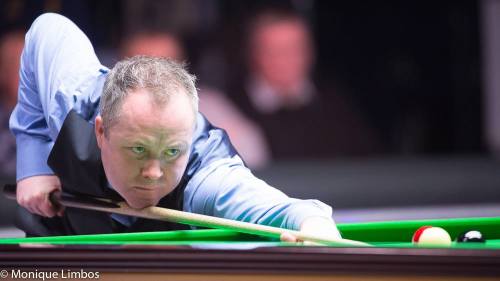 JOHN HIGGINS is four frames away from winning the Welsh Open title for a record fourth time after taking a 5-3 interval lead against Ben Woollaston.

The four-times world champion had the better of the opening session of today’s (Sunday’s) final against the Leicester star, who is playing in his maiden major ranking final after beating Mark Williams on Saturday.

Higgins has won the Welsh Open a joint record three times (2000, 2010, 2011) and victory today will make him the tournament’s most successful player moving him past defending champion Ronnie O’Sullivan and Stephen Hendry.

And a break of 84 gave the Scot the perfect start as he looked to claim his first major ranking title in more than two years following his win in the Shanghai Masters in 2012.

Woollaston then gritted his way to level terms with a run of 58 but Higgins made breaks of 63 and 105 to earn a 3-1 lead at the mid-session interval.

Leicester’s Woolllaston then won the first frame after the restart with a break of 54 before the next two frames were shared going into the session’s final frame.

And the 27-year-old looked a strong favourite to level the match at 4-4 when he made a break of 59. But the final’s biggest moment so far came when he missed a red allowing a counter-attack from Higgins. The Scot got back into it contention before he fluked the final green and cleared to steal the frame and take a 5-3 lead.

The final resumes at 7pm.