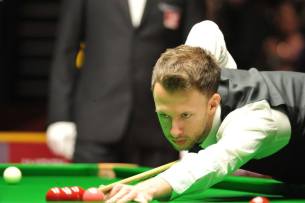 JUDD Trump proved why he is a serious contender to lift the UK Championship crown this week after an impressive display saw him sail into the fourth round.

The Ace in the Pack has rediscovered the type of form which saw him land his first UK title three years ago and is enjoying a good season having won the Australian Open and reaching the final of the Champion of Champions.

A full of confidence Trump set out a real statement earlier this afternoon (Monday) with a classy and most often unstoppable display to beat Fraser Patrick 6-3.

And to go along with that he registered his 300th career century – joining a list of many great names in the game to have achieved the landmark.

A break of 85 gave Trump the confident start he was looking for before he made century number 300 with a stylish 129 to double his lead.

Trump went one better in the next frame as a 130 put him three frames clear before going 4-0 up.

Patrick, playing his first game on TV, impressed after the break as a break of 66 got him off the mark before he won the next to reduce his arrears to 4-2.

A 57 break gave Trump a 5-2 lead before Patrick kept his slim hopes alive with a run of 54 to make it 5-3. But Trump finished the match in style, claiming his third century (104) to clinch a place in the last 16 stage.

“I felt good and I felt like I was playing solid and I’m full of confidence,” said Trump. “It wasn’t really a surprise to me how well I was playing so hopefully I can play well again in the next game.

“Fraser played pretty well for one of his first times on TV and you’ve got to give him a lot of credit because he made it hard for me and in the end I had to make a good break to win.”

Elsewhere, John Higgins continued to show signs his bad start to the season is over after an impressive 6-2 win over Matthew Stevens.

Higgins, who has won the tournament four times, led 3-1 at the interval thanks to a vital break of 62 which resulted in the Scot winning the fourth frame by a single point.

He then won the next two frames after the interval before a break of 52 in the eighth frame sealed a deserved win.

Irishman David Morris continued his fine run in the UK Championship after a 6-2 win over David Gilbert.

Morris was the headline maker on Saturday when he defeated world champion and world number one Mark Selby to reach the third round. And the confidence from that was in essence from the outset as he won the first four frames.

Gilbert reduced his deficit to 4-2 but Morris ensured a place in the last 16 taking the next two frames to see the match out.

And Nigel Bond suffered a taste of his own medicine as he was left undone by a sterling comeback from Scotland’s Anthony McGill.

Bond, who dramatically came back from 5-0 to beat Barry Hawkins on Saturday, looked on course for a place in the last 16 when he took a 4-1 lead in the last 32 battle.

But McGill responded brilliantly thereafter winning the next four frames to go ahead. Bond  edged a close tenth frame to force a decider but a break of 76 – McGill’s highest in the match – earned him a place in the fourth round.