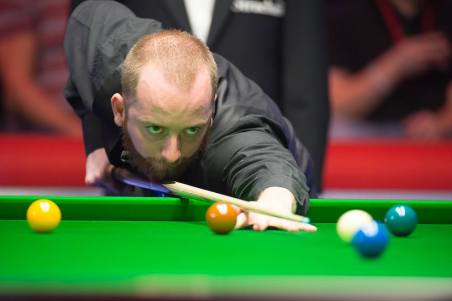 IRISHMAN David Morris produced one of the best performances of his career to knock reigning world champion and world number one Mark Selby out of the UK Championship.

The world number 62 put in a solid display and never trailed throughout as he recorded a 6-4 win to reach the third round.

A surprising result looked on the cards when Morris won three of the first four frames to take a 3-1 lead at the mid-session interval.

A break seemed to do the trick for Selby as breaks of 60 and 68 helped restore him to parity at 3-3. But Morris sent a huge warning signal to the Jester from Leicester as a brilliant break of 126 nudged him back in front.

Selby, who has appeared in the last two UK Championship finals, responded with a run of 67 to level once again but Morris closed the match in brilliant fashion as breaks of 72 and 79 gave him his most satisfying win to date since joining the main tour.

A delighted Morris said: “I made a good 126 break to go 4-3 ahead. I think if he had won that frame then he could have run out 6-3, that’s the way snooker goes. I’m delighted to win and to beat someone of Mark’s class is a big feather in my cap.

“I had a few good wins last year but I don’t think any of them compare to that one because it’s such a big event. I’ve had wins over Judd Trump and John Higgins but this was at the UK Championship, in front of a packed audience and on a TV table so that’s a big thing for me to win that match.”

Elsewhere, China’s number one Ding Junhui ended Jimmy White’s hopes of UK Championship glory with a 6-2 win and John Higgins battled his way to a 6-4 win over Jamie Cope.

Welshman Matthew Stevens battled back from 2-0 down to defeat Gerard Greene 6-3 and world number 84 Fraser Patrick extended his run in the tournament after recording an impressive 6-4 win against Ryan Day.

Thailand’s Dechawat Poomjaeng beat Michael Holt 6-3 to progress and there were also wins for Marco Fu, a 6-1 winner over teenager Lyu Haotian, and David Gilbert who beat Mark Joyce 6-2. Gilbert will face Morris in the next round.