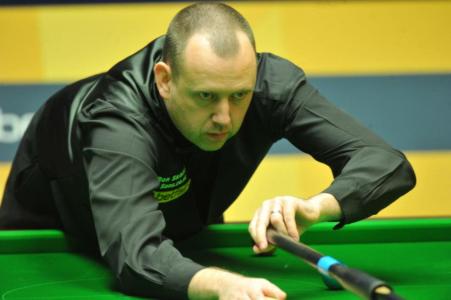 MARK Williams held his nerve to beat Ronnie O’Sullivan in a ranking tournament for the first time in more than 12 years and in doing so reached the International Championship semi-finals.

The Welshman ended more than a decade’s hurt against the five-times world champion, who had not lost to him in a ranking event since the 2002 Thailand Masters, as he bounced back from a poor start to claim a memorable 6-5 win.

Williams, winner of the World Championship on two occasions, will now compete in his first semi-final of a major ranking for the first time since his last four run in the Shanghai Masters in September 2012.

But a Williams win looked far from the cards when O’Sullivan cruised his way into a 3-0 lead and looked to be on his way to another crushing win following his 6-1 triumphs over Anthony McGill and Li Hang in rounds two and three.

However all was to change from the fourth frame onwards as Williams produced a stunning comeback hitting breaks of 120 and 59 to level the scores at 3-3.

Williams then went ahead for the first time winning a close run seventh frame before a break of 77 moved him to just a frame away from a stunning win.

But O’Sullivan got back into it as he quickly restored matters to force the match into a deciding frame.

Williams had the first chance and made 50 before running out of position. O’Sullivan then cross-doubled a red to give himself a chance to counter, but then missed a tricky black before Williams added 22 points to seal the result.

“I haven’t beaten him for so long, eventually I’ve got rid of that pain tonight,” a thrilled Williams said.

“I was shocking for the first few frames today and dragged Ronnie down. After the interval I was a different player. I made some good breaks and I’m over the moon to get through.

“It’s an excellent win for me, even though Ronnie wasn’t at his best. We’re both the same age but he can produce a lot better snooker than the likes of me and John Higgins. He’s still the best player in the world.”

Williams will face Mark Allen on Saturday in a bid to reach his first major ranking final since losing to Mark Selby in the final frame of the 2011 Shanghai Masters showdown.

Allen came back from behind in style to beat Michael White 6-3 in his quarter-final clash.The Ulsterman appeared in trouble after losing three of the opening four frames but after the interval won five straight frames to book his place into the last four.