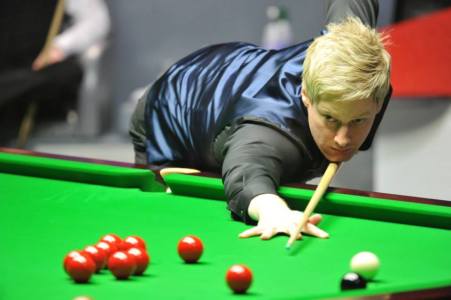 NEIL Robertson admitted to taking his ‘foot off the gas’ after he suffered a surprising second round defeat to Joe Swail in the International Championship.

The Australian let leads of 3-0 and 5-3 slip through his grasps as the former World Championship semi-finalist stormed back to produce one, if not, his biggest win in recent times.

The world number 2, who arrived in China this week as the tournament’s highest ranked player, looked to be cruising into the last 16 stage as breaks of 101 and 62 helped him to win the opening three frames of the last 32 encounter.

Much-needed breaks of 81 and 75 put Swail back into the match at 3-2 before Robertson again pulled away winning two of the next three frames with a top break of 106.

But the match proved far from over when Swail won two tight frames to force the match into a decider before a vital run of 46 handed him a huge scalp.

It is the second consecutive ranking event in which Robertson has squandered a 3-0 lead, having lost to Michael White in the Shanghai Masters last month.

Robertson, winner of this season’s Wuxi Classic, wrote on Twitter after the match: “Didn’t play bad, let my foot off the gas and let Joe back in. He played some solid stuff in the end. More time to get ready for next week now.”

As well as Robertson, the end of a dramatic third day’s play saw world number six Judd Trump crash out in the early stages after suffering a final frame defeat to Jamie Burnett.

The Bristol star, who was also involved in an eleven frame thriller in the first round, looked to have gained the upper hand when he won three frames in a row to lead 5-4.

But Burnett managed to follow up his first round win over Matthew Stevens in successful fashion as he took the next two frames with breaks of 56 and 45 to knock out the 2012 winner.

Trump and Robertson were not the only big names to make the exit back home as Shaun Murphy and Barry Hawkins fell to Robert Milkins and Mark Williams respectively.

Elsewhere, Ronnie O’Sullivan hit three centuries as he cruised into the last 16 with a dominant 6-1 win over Anthony McGill. The five-times world champion next meets China’s Li Hang who beat fellow countryman Zhao Xintong by the same scoreline.

Stuart Bingham’s hopes of winning a third title this season remained intact as he beat Ryan Day 6-3. The Basildon potter next faces a Shanghai Masters final rematch with Mark Allen who fought back from 3-0 down to beat Martin Gould.

There were four more matches which went into a deciding frame shootout with Marco Fu, Ricky Walden, Sam Baird and Xiao Guodong coming through as winners.

The likes of Peter Ebdon and Rod Lawler enjoyed comfortable 6-1 wins to progress and Michael White and Ian Burns top the draw after they both secured their places with wins against Mitchell Mann and Craig Steadman respectively.