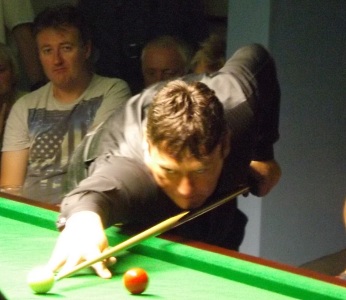 THE PEOPLE’s champion Jimmy White has given a popular Derby snooker club glowing praise by saying it is one of the best he’s seen in the country.

Six times World Championship finalist White was the star guest at Cueball Derby on Friday (August 1) as he showed a packed crowd some of his renowned dazzling snooker which millions have been accustomed to seeing from him over the decades during an exhibition event.

Winner of ten ranking titles, ‘The Whirlwind’ played eight frames at the Mansfield Road based club and took the time to meet fans, have photographs and sign items of memorabilia.

The popular 52-year-old pro is regarded as one of the sport’s most outstanding talents entertaining fans from all over the world with brilliant attacking-minded and easy on the eye snooker with the ability to pull off the most incredible shots from out of nowhere.

And despite being in the final stages of a wonderful career, White was at his fluent best on the night as he blasted in pots with the cueball on top of the side cushion with ease and also made a stunning break of 99 against Derby amateur Lee Shanker.

Speaking to the The Old Green Baize, White said: “I really enjoyed it tonight, there was a good crowd in and it’s nice to come to a really nice snooker club.

“It’s a bit of shame really when you go up and down the country playing exhibitions because you don’t really see that many quality snooker clubs but I was so pleased to come here and see fantastic tables, a great atmosphere and a lot of enthusiasm for the game.

“When I see that enthusiasm it inspires me to play well.

“It is in my blood to entertain and by me playing exhibitions and all my flash shots it gives me the time to play a winning way on the snooker table so it works out good for me.

“This is a good club and you don’t see many of them around – I’ll come back again.”

White achieved one of his many career highlights in Derby in 1992 when he beat Thailand’s James Wattana to lift the British Open title at the Assembly Rooms.

And White expressed his disappointment that the former Derby venue was dropped off the snooker circuit over the past decade or so.

“The Assembly Rooms is one of the best venues we’ve had (on the snooker tour),” he added. “I don’t know why we stopped going there to be honest.”

White’s special visit was another tip of the hat for Cueball Derby which continues to go from strength to strength since its re-opening in January last year after closing down as a Rileys club.

Manager Paul Beech, who has lead a major refurbishment at the club, said having White play an exhibition at the venue was a great reward for his staff’s efforts over the past 18 months.

“This is the first exhibition we’ve done since we took over here and we wanted one of the best and there’s not many people you can get better than Jimmy White,” he said.

“The hard work staff, myself and Danny Cooper the owner, the effort and time we’ve put into the club is made for nights like this.

“When we took the club over we had a lot of work to do because it wasn’t in the best state and members didn’t want to come here because of the condition of the tables.

“But now to have had Jimmy White here to a packed out crowd just shows the hard work we’ve done. I think we’ve done very well and have a club to be proud of.”