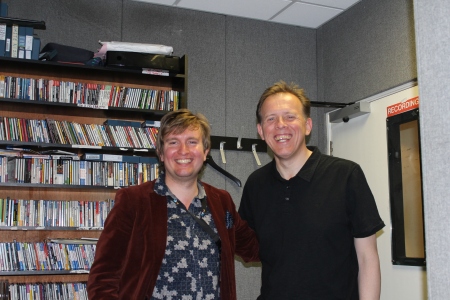 FORMER player and ranking event winner Neal Foulds is to feature in a new movie dedicated to snooker.

Foulds, who now works as a pundit for Eurosport and ITV, agreed to take on a cameo role as a commentator in the new film Extended Rest which is to hit cinemas nationwide later this year.

As reported in TOGB earlier this summer, the film stars former Porridge star Tony Osaba who plays the leading role of Terry “the Grenade” Kincaid – a character who is keen to return to the game following the death of his wife despite being in his sixties.

Foulds, who played professionally between 1983 and 2004 and once won the International Open, recently joined Osaba and the film’s cast for a special screening of the first twenty minutes of the movie in London’s Twickenham Club – one of the main set locations in the film.

Prior to joining the cast Foulds had a connection to the movie as his father Geoff taught Osoba how to play snooker for the BBC series “Give Us A Break” which was screened in the 1980s.

As well as Neal’s expert eye, other showbiz stars have joined the cast including John Challis who famously played Boycie in classic sitcom Only Fools and Horses as well as former Doctor Who stars Katy Manning and Frazer Hines.

Writer and director of Extended Rest, Oliver Crocker, said he was thrilled to have Neal and a strong cast on board.

“Neal Foulds is such a fantastic guy, he thought the project sounded fun and we enjoyed plenty of laughs recording his cameo,” he said.

“It was such an honour to spend time with a genuine snooker legend, I’m a great fan of Neal’s commentary style, he knows what he is talking about and injects humour and warmth into his very relaxed style of delivery.

“He was the only player I wanted to cameo as our commentator and I can’t tell you how thrilled I felt listening to him read my script. I used some of his own quotes and one-liners from real matches to tailor it to his style.

“We are so grateful for all the support for Extended Rest. We are making the film in mini-blocks throughout the year, in between full time jobs or other roles for the cast.

“It is such a fulfilling project, the cast are all like family and the film is my love letter to snooker.”