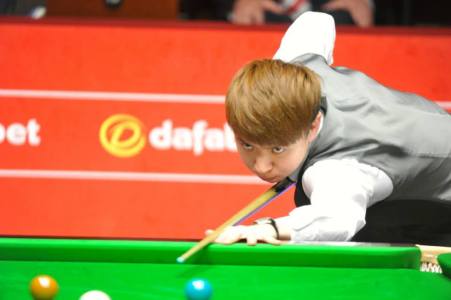 CHINA’s number two star Xiao Guodong showed terrific battling spirit as he came back twice from the brink of defeat to reach the Australian Open quarter-finals.

Guodong, who last season reached his first major ranking final in the Shanghai Masters, looked deep in trouble when he trailed former world champion Peter Ebdon 4-3 and trailed the eighth frame by 61 points.

But a brilliant match-saving clearance of 67 from the world number 23 took the match to a thrilling deciding frame at 4-4.

The match looked to be heading in Ebdon’s direction once again in the all-important ninth frame when he led 46-0. But the 2002 world champion could not take full advantage as the China star battled back and cleared from blue to black to take the match.

Guodong, who in April made his first appearance at the Crucible, will face Matthew Stevens in a bid to reach the semi-finals in Bendigo..

Elsewhere, Australian Neil Robertson made it a step closer to homeland glory after thrashing Jamie Jones 5-0 to reach the last eight of the tournament.

Robertson, who won the Wuxi Classic on Sunday, hit breaks of 103, 86, 140 and 80 in a ruthless display against the Welshman to set up a quarter-final tie against Robert Milkins who beat John Higgins 5-2 on Tuesday.

Breaks of 52, 64 67 and 107 helped Judd Trump secure a place in the last eight with a 5-3 win over Alan McManus.The Bristol ace will next play Ricky Walden who had the better of Martin Gould, winning 5-2.

The biggest surprise of the day saw former world champion Shaun Murphy fall to a surprising 5-3 defeat to Mark Davis.

And Davis will next meet former Australian Open winner Stuart Bingham who kept his hopes of winning the trophy for a second time after recording a 5-2 win against Mark Joyce.