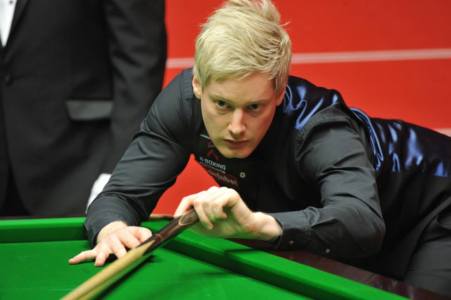 A MATCH-WINNING break of 78 in the deciding frame helped Neil Robertson to win the Wuxi Classic title in a thrilling final against Joe Perry.

The Australian successfully defended the title he first won last year after coming back from 9-8 down to beat his close friend and practice partner in what proved an exciting first major final of the new season.

Victory moves Robertson, who was shown to be in tears after completing the epic win, to ten major ranking titles in his professional career and sees him go level with snooker legend Jimmy White in the all-time list.

The heartbreaking defeat for Perry means he is left still waiting for his first major ranking title but despite disappointment can take great heart for taking world number three Robertson all the way.

It looked as if Perry was going to have his moment of destiny when a break of 93, the highest of the match, helped him to a 9-8 lead against his close friend who he has practised regularly at Willie Thorne’s Snooker and Sporting Club in Cambridge for many years.

But deep in trouble, Robertson showed his world class quality as breaks of 87 and then 78 – just when he needed it – earned him the £85,000 top prize and up to second place in the new World Rankings list.

Like his win in last year’s final against John Higgins, Robertson was forced to do it the hard way after Perry made a dream start in his quest for major silverware winning the first three fames of the contest.

But Robertson bounced back having the better of the next two frames to reduce his deficit to 3-2.

Perry showed he meant business as breaks of 74 and 61 restored a two-frame cushion which prompted Robertson to reply well with a well made break of 72. But an initial break of 47 in the eighth frame helped guarantee Perry a lead going into the evening session.

The ninth frame looked to be going Perry’s way when he developed a good lead in the hope of moving 6-3 ahead at the halfway stage. But a safety on the final red went wrong which left a pot on for Robertson who cleared to trial 5-4 rather than 6-3.

Robertson then levelled matters at the start of the evening session with runs of 44 and 33 in the tenth but Perry regained the lead soon afterwards with a break of 68.

But Robertson began to turn the screw when he dominated the next two frames to take the lead for the first time in the match to go 7-6 up front.He then looked set for glory when he moved 8-6 ahead with two brilliant positional shots to seal the 14th frame – one of them saw the cueball go around the angles from the yellow to be nicely on the final green.

Perry kept himself in contention winning frame 15 before a dramatic 16th frame saw him miss the final black off its spot when trailing 60-57. After a brief safety exchange, Perry made amends for his earlier miss by potting in the black long distance to move all-square at 8-8.

The world number 15 then was on the verge of his recording his biggest achievement in the game when an attacking canon into two reds led to a brilliant break of 93 to put him back in front and just one frame away from silverware.

But Robertson bounced back to break his good friend’s heart. Perry could not believe his luck when a long red stayed out of the pocket early on in frame 18 before an 87 from the Australian took the match to a deciding frame shoot-out.

The all-important final frame saw Perry have the first chance but missed a long blue into the baulk corner when leading 14-0. And that miss proved vital as Robertson dragged himself over the winning line with a break of 78.

Robertson will now look to continue his early season success when he plays in his home tournament – The Australian Goldfields Open – starting on Monday.