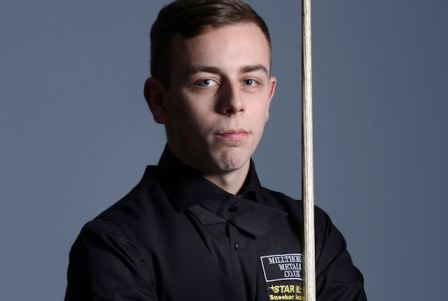 AMATEUR Oliver Brown continued his remarkable run of form at the start of the new snooker season after winning his first round match at the Wuxi Classic.

The 19-year-old followed up a sensational 5-0 win against Ding Junhui last month in qualifying with a convincing 5-1 win against Oliver Lines to reach the last 32 stage of the first major event of the campaign.

Brown has been given an opportunity to play after performing well enough in the summer Q School to earn a place on World Snooker’s top up list – which is used when not enough professional players enter one of its major tournaments.

Brown also impressed in the Australian Open qualifiers which were also held last month as he beat Andrew Norman, Dave Harold and Gary Wilson before losing out to Tom Ford in the final round of qualifying.

And the Derbyshire youngster has grasped an opportunity with both hands winning both matches convincingly. He next faces Martin Gould for a place in the last 16 after breaks of 69 and 81 helped him to a 5-1 win against Lines.

The second day of the competition saw world champion Mark Selby ease through to the last 32 with a 5-1 win over Robbie Williams. The match was Selby’s first televised game since his epic Crucible win against Ronnie O’Sullivan seven weeks ago.

Selby will next face Chinese talent Liang Wenbo who scored three centuries in an impressive 5-1 win over Jamie Burnett.

As well as Brown, teenager Yan Bingtao is causing a stir in Wuxi after he beat Barry Pinches 5-1. The 14-year-old, who won his opening wildcard match Yu Delu 5-4 on Monday hit three breaks of 50+ to set up a match against 2013 World Championship finalist Barry Hawkins.

Robert Milkins came through a deciding frame thriller to have the better of David Morris and former world champion Graeme Dott thwarted off a strong fightback from Zhou Yelong before completing a 5-3 win.

Michael White, who was one frame away from beating eventual winner Mark Selby in the World Championship, defeated Jamie Cope 5-3.

Other first round scores