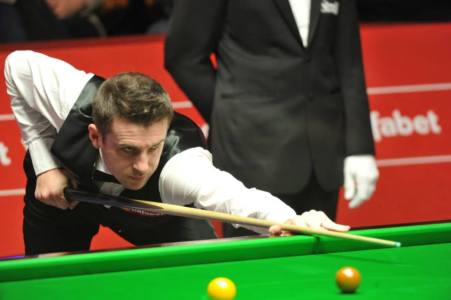 MARK Selby recovered from the worst possible start to trail Ronnie O’Sullivan 5-3 at the end of the opening session of the World Championship final.

Selby, bidding for his first world title, went 3-0 down as O’Sullivan looked like he had never been away from his convincing wins against Shaun Murphy and Barry Hawkins – taking advantage of some poor safety from the Leicester cueist.

But Selby will go into tonight’s second session a relieved and much happier man after he improved his game and clawed his back into the final winning three of the next five frames.

After both players entered the Crucible arena to a rapturous reception from a packed crowd, O’Sullivan took the first frame with a break of 69 after Selby caught the blue when trying to play safe to the baulk cushion.

A nervous Selby made more errors in the second frame as a missed black off its spot and a long red shortly afterwards allowed O’Sullivan to double his lead.

And it was worrying times for the world number three when O’Sullivan hit a break of 102 to go three frames in front in less than an hour of play. But Selby dug deep in the fourth to get off the mark and reduce his deficit to 3-1 at the mid-session interval.

The restart saw Selby win a second frame after O’Sullivan left the final yellow on following a snooker from his opponent. Selby cleared from yellow to pink to close the gap to one frame.

But O’Sullivan restored a two-frame advantage after a snorter of a long red set up a break of 63. Selby then dominated frame seven to tighten the screw once again at 4-3.

And the final frame looked like it would go Selby’s way when he dramatically fluked a red into the middle pocket, giving him a golden chance to take the frame. But just seconds later he missed the following black off its spot. O’Sullivan cleared from behind to take a 5-3 lead.

The second session begins at 7pm.

One thought on “Final Latest: Selby fights back after dominant O’Sullivan start”