DEFENDING champion Mark Selby was forced to dig deep after beating Mark Davis in a final frame decider to reach the quarter-finals of the Masters. 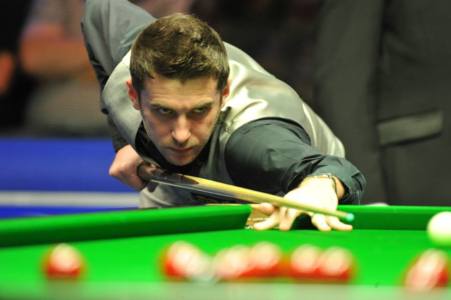 Selby, who won the prestigious title last year, appeared to be cruising into the last eight of the famous invitational event when he stormed into a 4-0 lead against the Six Reds world champion.

But Davis showed his true grit and fought back with brilliant resolve, winning five of the next six frames to force a deciding frame shootout.

However, in a long final frame it was Selby who crossed the winning line to set up a quarter-final tie with either Stuart Bingham or John Higgins.

Breaks of 59 and 80 gave the Jester from Leicester a quick 2-0 lead before he dominated the third frame to extend his lead further 3-0.

A comfortable victory then looked on the cards when Selby hit a break of 58 to close the first session 4-0 to the good.

Davis got off the mark after the restart after a nice break of 80 before cutting the deciding black into the middle pocket to reduce his deficit to 4-2.

Selby re-asserted his dominance in frame seven to go 5-2 ahead and on the verge of victory but Davis hit back with the highest break of the match and the first century of the tournament with a break of 136.

Davis continued to keep his slim hopes alive when he fought back from 44 points adrift to make it 5-4 after Selby missed a long red which could have ended the contest.

And Davis forced the match into a nail-biting decider after he dominated frame 10.

But Selby showed his true grit when he came out on top in the final frame. In a scrappy and tense frame, which lasted more than 50 minutes, a break of 38 from the world number two star proved decisive to end a resilient fightback from Davis.

Not at his fluent best by any means, Selby will be relieved to have come through a tough first match.

The first round match between Bingham and Higgins starts at 7pm tonight (Sunday).

2 thoughts on “Selby edges to victory in tense opener”