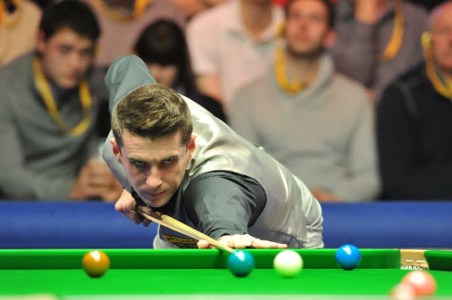 MARK Selby said his decent record in deciding frames gave him the confidence he needed to get past Mark Davis in the first round of the Masters.

Despite leads of 4-0 and 5-2, the world number two was pushed all the way by this season’s Six Reds world champion before coming through the final frame to claim a tough 6-5 win.

Selby, who will face either Stuart Bingham or John Higgins in the next round, famously beat Ronnie O’Sullivan in a final frame shootout to lift the Masters four years ago.

And after the match he admitted to losing his focus throughout the second session.

“I controlled the match to go 4-0 ahead, but I seemed to go back out and lose focus,”  he said.

“For whatever reason, I struggled a bit. Every credit to Mark. He came back strongly. You just have to wipe out everything that has gone before and focus on the final frame.

“I’ve had a lot of deciding frames and managed to come through more than I’ve lost. I beat O’Sullivan 10-9 in the final a few years ago. It gives you confidence knowing you’ve won a few deciders in the past here.”

The defeat would have been an agonising one for Davis, who is still to win a match in a Masters event.

“I never got a decent chance in the final frame,” he said after the game. “He (Selby) held himself together in the end. It all came down to a few poor safety shots from me in that final frame.”