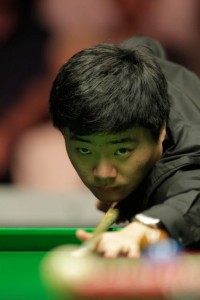 DING Junhui’s superb run of form continued as he held off a strong fighback from former world champion Graeme Dott to book his place in the International Championship final.

The Chinese star will face Marco Fu for the crown and £125,000 top prize and victory will see him become the first player in more than 23 years to win three consecutive major events – following his recent success in Shanghai and India.

But Ding was forced to battle his way into Sunday’s final after Dott threatened an unlikely win after earlier being 7-3 behind.

For large parts the match was a scrappy affair and the first four frames were shared before Ding took a 5-3 advantage at the mid-session interval.

And the semi-final looked to be heading for an early finish when Ding extended his lead to 7-3 after the restart.

But Dott kept his chances of making his first major final since reaching the World Championship final in 2010 alive when breaks of 72, 75 and 83 reduced his deficit to just one frame at 7-6.

But Ding managed to stop the rot in style in frame 14 when a great long plant shot started the matches’ highest break of 121 to go within one frame of victory.

But typically Dott refused to give in as a break of 57, including a brilliant cut on a red to the middle pocket, helped him win the next frame and go back to one frame behind.

And it looked as if the semi-final would go right to the wire when Dott held a 62-6 lead in frame 16. But when the Scot played a loose safety on a red, Ding cleared the table brilliantly to seal his place in the final as the Chinese crowd roared with the delight.