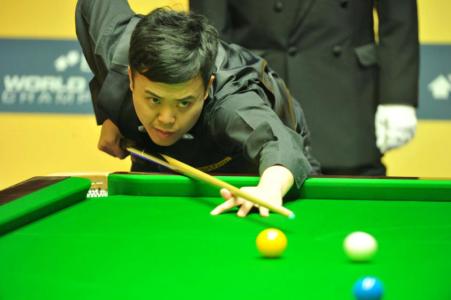 MARCO Fu clinched a place in the semi-finals of the International Championship in dramatic fashion after coming back from the jaws of defeat to beat Mark Selby.

The Hong Kong star’s chances of reaching the last four appeared to be all over when he trailed 5-3 and Selby was in the balls in the ninth frame.

But Fu managed to snatch the frame and reduced his deficit to 5-4 after the world number two star failed to build on a 60-27 advantage.

And that turned the match as Fu hit breaks of 84 and 112 to seal a thrilling win and go just one win away from reaching his fourth ranking final in 2013.

To reach Sunday’s grand final, Fu will have to beat Joe Perry who continued his impressive season so far with a 6-1 quarter-final win over Welshman Ryan Day.

Friday’s match against Fu will be Perry’s first major ranking semi-final since the World Championship of 2008 when he lost 17-15 to Ali Carter at the Crucible.

Ding, who won the Shanghai Masters and Indian Open, is now just two more wins away from becoming the first player since Stephen Hendry to win three major ranking events in a row. Seven-times Crucible winner Hendry won five on the bounce in 1990.

The match lasted more than four and a half hours but Ding showed his battling qualities as well as his flair to book his spot in Saturday’s second semi-final.

His opponent will be former world champion Graeme Dott who reached his first major semi-final since the 2011 German Masters by ending China’s Liang Wenbo impressive run with a 6-3 victory.