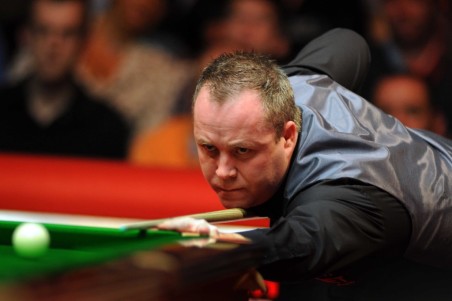 JOHN Higgins had the better of the opening session of the Wuxi Classic final, leading Neil Robertson 5-4.

In an entertaining final so far, the four-times world champion looked to be in control when he led 5-2 but world number one Robertson fought back at the end of the session to reduce the gap to just a single frame.

Robertson won the opening frame with a break of 61 before Higgins, chasing his second trophy already this season after winning the Bulgarian Open, responded sharply with a breaks of 78 and 56 to go ahead for the first time.

The Australian hit back with a break of 91 to level the scores at 2-2 at the mid-session interval.

But Higgins, who this season is playing with a brand new cue, looked as if he was back to his best after the restart as breaks of 70 and 93 gave him a two-frame cushion lead for the first time at 4-2.

And the Scot stretched his lead even further to three frames with a punishing break of 82 after Robertson missed a straight-forward red earlier in the frame.

But Robertson managed to stop the rot as a break of 52 reduced his deficit to 5-3 before he closed the gap to just a single frame when he ended the session in style with the first century break of the final – 113.

The winner of this season’s first major competition will win the top prize of £80,000 and will gain a tournament total of 7,000 ranking points.

One thought on “Slender advantage for Higgins in Wuxi final”