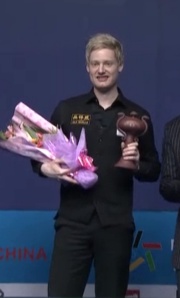 NEIL Robertson showed why he is snooker’s top star after a brilliant fightback display saw him win the season’s first major tournament.

The world number one recovered from 5-2 down to defeat four-times world champion John Higgins and lift the Wuxi Classic trophy.

It is back to back majors for the Australian following his win in the China Open earlier this year. Victory once again in the Far East was also the perfect remedy for Robertson who suffered a surprising first round exit at this year’s World Championship against Robert Milkins.

Trailing 5-2, Robertson won the final two frames of the opening session to keep his chances alive ahead of the final session.

And Robertson took his momentum into the all important final session as he levelled the match before taking the lead for just the second time in the contest at 6-5.

Robertson then began to pull away as he stretched his lead to 7-5 before a break of 59 put him just two frames away from glory leading 8-5 – his sixth frame on the bounce.

Higgins managed to claw a frame back after the players returned from the mid-session interval but Robertson hit back when he took full advantage of a poor safety shot from the Scot.

Higgins kept his slim hopes alive when a brilliant positional shot from brown to blue helped him win a tense and close-fought 16th frame.

But a break of 65 from Robertson ended Higgins’ hopes as he claimed the first big trophy of the season and the £80,000 cash winning prize.

Robertson joined Ricky Walden as winners of the Wuxi Classic since it was upgraded to major ranking status.