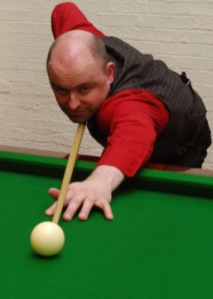 LEE SPICK has said his return to snooker has come as a major shock especially after battling with personal problems in his life.

The Mansfield-born potter returned to professional status since dropping off the tour in 2010 by winning the third and final Q School event in May.

Spick beat Darrell Whitworth, Sanderson Lam, Darren Cook and Duane Jones to earn himself a two-year tour card which was major contrast to the previous two events of this year’s Q School series where he failed to win a single frame.

His return to the professional fold comes a year after he decided to retire citing he “had enough” of the sport.

But he was persuaded back into the game by his family and girlfriend Natalie who helped him pay his fees to give it another go.

And he told The Old Green Baize he was amazed to be back given his recent personal problems including alcohol.

“I’m really surprised, I wasn’t expecting it to be honest,” he said.

“The opponents I played probably worked harder for it than I did. With all the problems I’ve had I didn’t think I had it in me to get through.

“The first two results were awful but I used my head and my experience and managed to turn it around. It’s all come out of the blue to be honest.

“I would like to thank my girlfriend Natalie, my Dad and my Grandma who have helped me so much and stood by me.”

Spick now is seeking sponsorship money to help him play in the next European Tour PTC event which takes place in Rotterdam starting on July 19.

“You got to be sponsored otherwise you can’t play,” he added. “It’s great that the prize money and the rewards are there but you have to have some money behind you to play in the tournaments.

“If I can make it to Rotterdam then I’ll certainly look forward to it. If my head is right and my game is right I have every chance of doing well.”