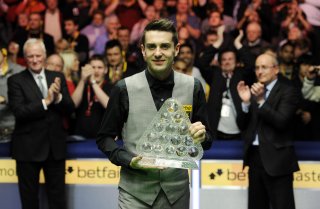 WORLD number one Mark Selby was named World Snooker’s player of the year at a glitzy end-of-season awards ceremony.

The Leicester star was awarded the honour at London’s Dorchester Hotel on Thursday (May 9) after enjoying a superb season winning the UK Championship and The Masters this season as well as two PTC titles in Germany.

The top accolade for Selby comes just a year after he sustained a career-threatening neck injury towards the back-end of last season.

Selby was also crowned the winner of Snooker Writers and Fans Player of the Year awards.

Performance of the year went to Crucible king Ronnie O’Sullivan for his victory in this year’s World Championship after just playing one competitive match all season.

Preston’s Ian Burns was awarded the Rookie of the Year after an excellent debut season on the main tour which saw him climb up to number 68 in the end-of-season world rankings list.

Jimmy Robertson won the gong for snooker’s Magic Moment of the Year for his incredible 57 clearance in just 130 seconds to beat Chinese player Tian Pengfei in the World Snooker Shoot-Out which was held in January.

The event also raised money for World Snooker’s charity of the Year Bluebell Wood Children’s Hospice. For more information about the charity or to make a donation visit http://www.bluebellwood.org.

One thought on “Selby named Player of the Year”