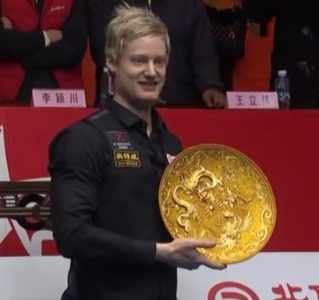 NEIL Robertson clinched his first major ranking title in more than two years after an impressive win against Mark Selby in the China Open.

The Australian was in control throughout as he beat the world number one 10-6 to lift his first China Open trophy and collect the cash winning prize of £85,000.

Robertson’s win means he is up to number two in the world rankings as a fantastic opening session did the damage as he won six of the first seven frames.

Remarkably, this is Robertson’s first major ranking title in the sport since he beat Ronnie O’Sullivan in the World Open in September 2010. He did win the Masters last year but that is an invitational tournament featuring just the world’s top 16.

And success for the Australian was coming after knocking on the door with consistent displays throughout the season after being runner-up in the International Championship, Betfair Masters and the PTC Grand Finals.

But there was no stopping Robertson in Beijing today as he ensured he would go into next month’s widely anticipated World Championship with one of this season’s major trophies to his name.

Despite winning the first frame, the snooker Gods were not on Selby’s side as he struggled to get a good run of the balls while on the table falling in unlucky positions on several occasions.

But the Australian took his chances when the opportunity came. Leading 2-1, Robertson won a forty minute fourth frame on the final black to take a 3-1 lead after Selby missed chances to level at 2-2.

Robertson, looking to avenge Selby’s win against him in this season’s Betfair Masters final, then pulled away from the Leicester star winning the next three frames to take a huge 6-1 lead at the interval.

A good start to the evening session was needed if Selby was to mount a comeback and a good start is exactly what he got.

Breaks of 81 and 125 gave him the first two frames of the session before he reduced his deficit to just two frames with a break of 66 in the tenth frame.

But Robertson’s pursuit of the title was back on track after a superb break of 110 ended Selby’s run to lead 7-4 at the mid-session interval.

After the restart Robertson pulled clear again after a brilliant cannon shot from green to brown was followed by a superb long blue to move again into a four frame lead. The next frame then saw the Australian on the verge of the winning line with a break of 90.

Robertson was then made to wait and earn his victory as Selby made breaks of 116 and 63 in frames 14 and 15 to keep his very slim hopes of winning alive.

But the wait was over when Robertson dominated the next frame despite Selby’s attempts to get the snookers he needed to pull another frame back. A terrific long pot on the final green from Robertson sealed the win.

Robertson and Selby will next be in action for snooker’s biggest the World Championship which begins on Saturday, April 20.

One thought on “Impressive Robertson holds off Selby for China title”