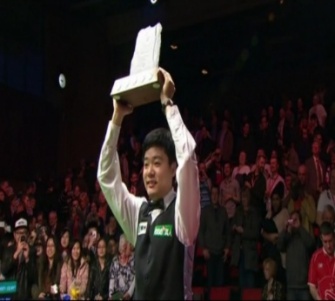 Will Ding Junhui keep hold of his Welsh Open title?

DING Junhui has said world number one Mark Selby is the man to beat if he is to capture Welsh Open glory once again.

The Chinese star, who beat Selby 9-6 in last year’s final, kicks off his defence of the Welsh title tomorrow (Monday) at the Newport Centre when he takes on Dechawat Poomjaeng in the last 64 stage.

Ding has had a fairly quiet season on the baize so far winning just one PTC event back in December but playing a qualifying match will give him a good opportunity to find some form and adjust to the Newport Centre arena before a potential first round clash against Mark King.

But the world number nine told World Snooker defending his crown will be a tough task given that the UK Championship and Masters winner is currently enjoying his finest spell in the game.

“Mark is always very hard to beat because he never gives up and doesn’t make many mistakes,” he said.

“In the final last year I had to try my hardest on every shot. Mark is the best player at the moment but I would be happy to play him again, it’s good to go up against the best.”

The opening day will see the eight remaining qualifying matches played out which have been held to the venue stage of the competition. Selby meets six-times world champion Steve Davis in what on paper looks like the game of the day.

Judd Trump who has suffered early exits in both the UK Championship and German Masters will hope to return to form when he takes on Mike Dunn. Another intriguing match sees amateur Gareth Allen step up to the big time with a dream clash against three-times Welsh Open winner John Higgins.

Surprisingly, you have to go back to 1999 to find the last time a player from Welsh shores won the Welsh Open. That player was Mark Williams back who is also in action on the opening day against Liu Chuang – a repeat of last season’s World Championship first round encounter. Other contenders flying the flag for Wales are Matthew Stevens, Dominic Dale and Ryan Day.

The first round begins on Tuesday and one player who will not feature is recent German Masters Ali Carter who failed to qualify after a shock defeat to Gerard Greene on Saturday.

The tournament this year has adopted a new format (like the German Masters) where the top names have to qualify in order to secure their first round spot. And because of the change – the first round draw has something of a fresh look to it with some new faces reaching the last 32.

One of them new names is Ian Burns who takes part in his first major ranking event with a first round clash against 2007 winner Neil Robertson.

Sam Baird and Craig Steadman also feature in the draw who are both making their second major ranking event appearances after winning their two qualifiers in Sheffield. Baird will have fond memories of the Welsh Open last year when he was one frame away from beating Mark Selby in the first round before losing 4-3.

The matches are best-of-seven up to the last 16 stage – an issue which has already been hotly criticised on Twitter and online forums.

And with the World Championship not too far away, every game is vital with players having the chance to climb up the rankings ahead of the final rankings cut-off and the Crucible qualifiers in April.