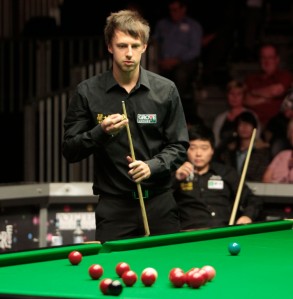 Day 2 of the UK Championship saw a major shock as defending champion Judd Trump lost his first round match against Mark Joyce.

DEFENDING champion Judd Trump is out of the UK Championship after suffering a shock defeat to qualifier Mark Joyce.

An out-of-sorts world number one was sent packing his bags after the Walsall potter, ranked 50 in the world, came back from 5-2 down to earn one of his best victories of his career, if not the best.

Trump, who beat Mark Allen in last year’s UK Championship final, looked to be cruising to the last 16 stage when he took a 3-0 lead against Joyce who himself was struggling to produce his best form.

Joyce, who two years ago suffered the ordeal of being attacked during a night out, kept in touch winning the fourth frame before the mid-session interval. But after the restart Trump looked certain of winning when he won two of the next three frames to be just one frame away from victory.

But the recent International Championship winner failed to recapture any momentum as Joyce dug in to win the next three frames and take the match to a deciding frame which nobody at York’s Barbican Centre would have thought possible.

Trump had the first chance in the vital frame making 37 before he missed a tricky yellow to the centre pocket. Joyce missed a red on 16 but was given another opportunity and made 49. Trump then battled for snookers but Joyce clinched a place in the second round by sinking in the final green.

The result meant Trump missed out on being just the third player to defend his UK Championship title. Steve Davis and Stephen Hendry remain the only two players to have done this in the competition’s 35 year history.

Joyce will meet Ali Carter on Tuesday for a place in the quarter-finals after this year’s World Championship runner-up eased through with a 6-2 win over Steve Davis.

The day’s other surprise saw last year’s finalist Mark Allen crash out of the tournament after falling to a 6-3 defeat to Marco Fu. The Hong Kong star was too hot to handle for the Ulsterman and hit the tournament’s joint highest break of 131 as he sailed to a 5-1 lead.

Allen then showed his fighting spirit winning the next two frames but his comeback was over when a break of 59 saw Fu reach the last 16 stage.

Elsewhere, Mark Davis booked a second round tie against John Higgins after he brushed aside Cao Yupeng 6-1 and Shaun Murphy began his pursuit for his second UK Championship title with a 6-3 win over Gloucestershire’s Robert Milkins.