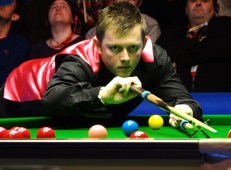 MARK Allen has accused Cao Yupeng of dishonesty following his surprising first round defeat to the young Chinese sensation.

Allen, who won the World Open earlier this season, was sent crashing out of this year’s World Championship against the qualifier ranked 81 in the world in a 10-6 loss. Yupeng looked in tremendous form throughout and showed no signs of nerves when crossing the all important finishing line.

But the Northern Irishman’s outburst stems from an incident in the tenth frame and claimed Yupeng did not admit to making an illegal push shot on the cueball.

“I think that the big turning point of the match came at 5-4,” Allen said in the post-match press conference. “He was in the balls and Paul Collier the referee missed a blatant push. It was quite obvious to me and to anyone watching at home they would probably see that no problem.

“It was a big stage of the match considering I had put him under pressure last night to get back into it at 5-4. If the referee rightfully calls a foul there I have a good chance of going five each and the match is different but he went on to pull away at 7-4 which was massive.

“He (Yupeng) did look at the referee as soon as he had done it to say ‘are you not calling a foul here?’. I looked at Paul, I looked at Michaela who was marking the match and I spoke to [Terry] Griffiths at the interval who was commentating on it, blatant foul he said. Anything that Terry says I trust and I was pretty confident at the time that it was a foul, that pretty much confirmed it to me at the interval.”

“It seems to be a bit of a trait for the Chinese players, there have been a few instances in the past where there has been fouls and blatant cheating going on, and it needs to be corrected. He’s a good enough player he doesn’t have to do that.”

But despite the incident, Allen admitted Yupeng was the better player and deserved the win.

“I never got anything going out there at all, I never got any rhythm going and that’s all credit to the way Cao started the match because he put me under pressure from ball one, I didn’t really expect that,” he added.

Cao said he could not remember the incident and was delighted to make a winning start in his first match at the Crucible.

“It was a big challenge and a big win for my career,” he said.  “I don’t know if I fouled, I can’t remember it. I just concentrated on playing.”

Whether Allen’s comments will land him in trouble with World Snooker bosses or not only time will tell. But it is expected his comments will be investigated by the sport’s governing body.

Tonight saw Stephen Hendry and much fancied title contender Neil Robertson book their places in the next round with 10-4 wins against Stuart Bingham and Ken Doherty respectively. Hendry will meet fellow Scot and defending champion John Higgins in the next round.

Robertson will meet David Gilbert who became the first player to reach the last 16 of this year’s World Championship with a surprise 10-8 win over Martin Gould.

The Tamworth potter looked set for a comfortable victory when he lead his opponent 9-5 but Gould came fighting back winning three consecutive frames to fall just one frame behind.

But world number 68 Gilbert held his nerve and won a scrappy 18th frame to take him into the second round.

Teenager Luca Brecel make his much-anticipated Crucible debut against Stephen Maguire this morning. The 17-year-old, who beat Mark King to qualify for Sheffield, struggled to settle at the start as the Scot raced into a 4-0 lead.

But Brecel felt much better in the second half of the session, winning three of the final five frames – including a century break – to trail 6-3. They will play to a finish on Monday morning.

Today’s other game also saw another Crucible debutant take to the stage. Welshman Jamie Jones took on 2005 world champion Shaun Murphy and made a dream start winning two of the first three frames.

But the former world champion came back and took  3-2 lead before the pair shared the final four frames giving Murphy a slender 5-4 lead going into Monday’s crucial afternoon session.